Home PUO SPORTS ‘We are the guilty ones’ – Marcelo calls on Real Madrid players... 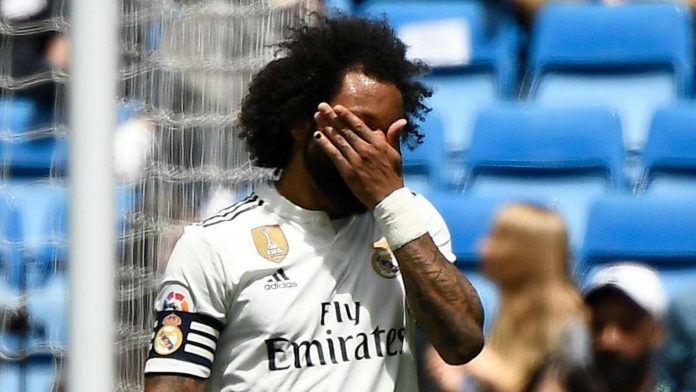 Los Blancos finished the campaign with a defeat to Real Betis on Sunday, leaving them with their lowest points tally in La Liga since 2001-02.

Long-serving defender Marcelo concedes he and his team-mates must shoulder the blame for Real Madrid’s “tough” campaign.

The Spanish giants also exited the Champions League at the last 16 stage with defeat to Ajax and were beaten by bitter rivals Barcelona in the semi-finals of the Copa del Rey.

And Marcelo, who lost his place in the side to Sergio Reguilon prior to Zinedin Zidane’s reappointment, admits the entire squad should accept responsibility for what has happened over the past nine months.

“The next season will soon start and we can’t make the same mistakes.

“Real Madrid never left, it is always good, fighting for everything. In seven years we have achieved almost everything, a bad season is not going to change what Real Madrid is. Madrid is very big.”

Defeat to Betis was Madrid’s third in four matches to see out the campaign, and their first on home soil in Zidane’s second spell at Santiago Bernabeu.

The outgoing European champions finished the season under their third boss of the campaign, after the catastrophic brief reigns of Julen Lopetegui and Santiago Solari that preceded Zidane’s reappointment.

Former Spain boss Lopetegui, appointed as Zidane’s replacement in June, lasted in the job until October by which time the team were mired in mid-table in La Liga and all but out of the title race.

The club were rejected by a number of possible replacements, including Michael Laudrup and former Chelsea boss Antonio Conte, both of whom cited the lack of stability at the Bernabeu as the reason they declined.

Former fans’ favourite Solari was brought in, initially as a stopgap measure, but was appointed on a permanent deal shortly afterwards.