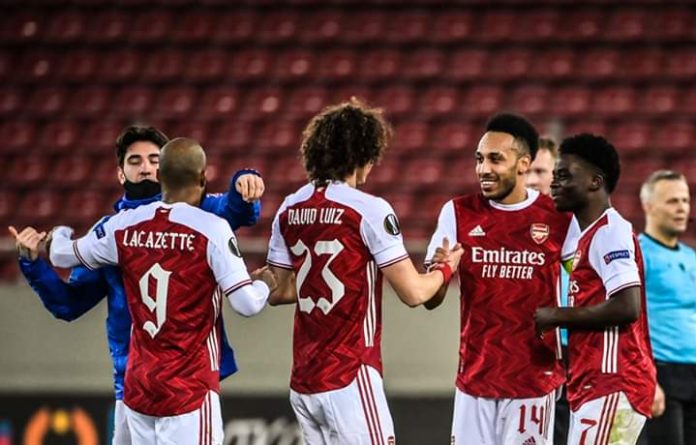 Just when it appeared the Gunners’ progress in the Europa League would be halted by Benfica, their captain came up with the goods.

After what has been a miserable campaign in the Premier League so far, one that sees the Gunners currently languishing in 11th place ahead of Sunday’s trip to Leicester, there was an all-or-nothing feel about Thursday’s crucial Europa League last-32 second-leg clash against Benfica in Athens.

Defeat and Arsenal’s season was effectively over by March. Win and the chance of a trophy and qualification for the Champions League remained.

There was no real room for error for the Gunners following the 1-1 draw in the first leg and memories of last season’s shock defeat by Olympiacos at this stage of the competition were fresh in everyone’s minds before kick-off.

And, trailing 2-1 with half an hour remaining, they once again found themselves on the edge of disaster.

But after Kieran Tierney found an equaliser, Pierre-Emerick Aubameyang stepped up with just three minutes remaining to keep Arsenal’s season alive in the most dramatic of fashion.

This was a vital win for Arteta and for Aubameyang it was a night that made a mockery of suggestions that his best days had been and gone.

After his hat-trick against Leeds, the Gunners skipper endured a difficult week. His costly misses in the first leg against Benfica drew plenty of criticism and he was singled out again after Sunday’s defeat at the hands of Manchester City.

Sky Sports pundit Jamie Redknapp said the 31-year-old had lost his ’superpower’ and that he now looked like a striker who gets bullied by defenders.

Arsenal vs Chelsea: what my players need – Mikel Arteta reveals