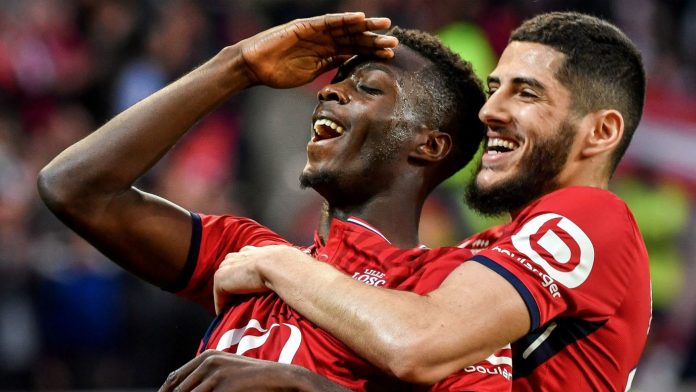 The Ivory Coast international has been linked with a number of Europe’s top clubs after helping his side to a second-placed finish in Ligue 1.

Lille manager Christophe Galtier has confirmed that in-demand winger Nicolas Pepe will leave the club this summer, piquing the interest of a clutch of Premier League sides.

The Ivory Coast international has been heavily linked with Arsenal and Manchester United, after a season in which he has starred in Ligue 1, scoring 22 goals to help Lille wrap up second place with a game to spare.

Pepe joined Lille from Angers in the summer of 2017 for a fee of £8.7million, and has made a total of 77 appearances for club, scoring 35 goals and making 17 assists in the process.

The 23-year-old will likely cost around £69m ($87.8m), but that is unlikely to dissuade United as they look to begin their rebuilding job ahead of next season.

In an interview with Canal+, Christophe Galtier said: “Nicolas Pepe will leave. Life’s like that, football’s like that today.

“He is a player of the highest level who will have a big decision to make on the choice of his next club.

“There will be a battle between the great European teams.

“I hope that he will take good amount of time to think about it, do his research.”

Galtier’s remarks are similar to those made by his president Gerard Lopez earlier in the season.

When quizzed on the future of the team’s star, Lopez also suggested that the Ivorian will likely be playing his football away from Ligue 1 next season.

“This summer, I think we will sell four to five players, no more,” Lopez said.

“All clubs are forced to balance their accounts except perhaps one. I would yes say, it is sure he will leave.

“He enters a price range that can no longer be paid.

“There is a career choice to him make him for him, I think he will have the choice.”

His greatest chance of remaining in France now seems to be a touted transfer to champions Paris Saint-Germain, who are known admirers having seen the player up close this season.

Pepe scored as Lille hammered PSG 5-1 on the day the team from the capital had been expected to wrap up a second consecutive Ligue 1 crown.

Thomas Tuchel’s side finally clinched their title the following weekend, having suffered a second setback days before when they lost 3-2 away at Nantes.

Lukaku ‘only’ replacement for Lewandowski at Bayern – Matthaus