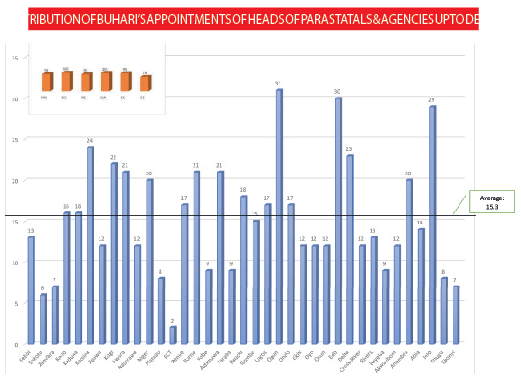 The perception that President Muhammadu Buhari’s political appointments have unduly favoured the northern part of the country does not appear to be supported by facts.

Documents obtained by “The Interview” which contain all the high-profile political appointments made by Buhari since he came to power in 2015 show that the appointments have been more nuanced than public perception suggests.

The documents titled: “Compilation of political appointees, heads of parastatals and agencies” and “Portfolios of ministers, special advisers, senior special assistants and special assistants to the President”, and obtained from a reliable source, were last updated in December 2018.

The documents, the first 43 pages and the second 17 pages, showed, for example, that between 2015 and 2018, while the North Central topped the number of appointments in Ministries, Departments and Agencies (MDAs) with 102 appointees, the South West came second with 101 appointees giving the two zones 35 per cent or 203 of the 567 appointments made. It also showed the offices where the deployments were made and dates of assumption of office.

The South-South came third with 99 appointments, ahead of the North West, President Buhari’s zone, which came fourth with 94. The North East followed with 93, and the South East 78.

In the North Central, Kogi State topped with 22 appointees, followed by Kwara State with 21, while the Federal Capital Territory (FCT) got the least with two appointees.

It is instructive that while Kwara was second for appointments in the North Central and sixth countrywide, the outgoing Senate President, Dr. Bukola Saraki, often took Buhari’s government to task, claiming under-representation in federal appointments.

Ogun State in the South West, topped countrywide with 31 appointees, more than the MDAs’ appointments for three North West states – Kebbi 13, Zamfara 7, and Sokoto 6 – combined. Katsina State topped the North West appointments with 24, while Kaduna and Kano States each got 16, and Jigawa State, 12.

Although the South East was bottom, Imo State had the third highest number of MDAs’ appointments countrywide with 29 appointees, while Anambra State had 20, and Abia State 14. Enugu and Ebonyi States had eight and seven respectively and each surpassing Sokoto State.

Public opinion in the last four years has been hugely dominated by a perception of serious bias in appointments in favour of the North by the Buhari government.

Sentiments about regional bias in political appointments are sometimes laden with religious undertones, not reflected in the classified documents. The consequential nature of the postings is, also sometimes, a hotly contested issue, with some arguing that a section of the country gets more “juicy” appointments than others.

But the appointments also show an interesting pattern. Of the 567 executive appointments made to MDAs, 220 or 39 per cent were from states where Buhari lost to former President Goodluck Jonathan, far better than public perception suggests.

The South-South, the opposition Peoples Democratic Party (PDP’s) stronghold is number three on the MDAs’ appointments table with 99 appointees, beaten only by the North Central and the South West. For example, in Delta State where Buhari lost to Jonathan by 1,162,495 votes and in Rivers State where he lost by 1,417,837 (two states where he suffered his worst losses) the MDAs’ appointments were 23 in Delta and 13 in Rivers respectively, compared with the three core northern states of Sokoto, Kebbi and Zamfara, with 26 appointments combined, but, total marginal winning votes of 1,454,002 over that of Jonathan.

This appointment marginally tilts the balance in favour of the South, with 52.4 per cent against the North with 47.6 per cent. The relatively higher number of such high-profile appointments from the North made between 2015 and 2016 (Buhari’s early days in office), tended to give the incorrect impression that the North retained an unfair share of the appointments till date.

Kebbi, Zamfara, Nasarawa, Plateau, FCT, Bayelsa, Ebonyi have zero appointments of presidential aides and thus will not even appear in the chart. Adamawa and Kano top the list with 11 each; while Oyo follows with 10; Ogun nine; Lagos and Kaduna, 8 each; and Katsina, seven.

A reliable source who refused to be named said that “the President has been severely criticised for so-called lopsided appointments in favour of the North, but the facts hardly support this view.”

The source continued: “Unfortunately, since the public has been misled to believe that the North has this government by the jugular, even those from parts of the North that have been short-changed are forced to suffer in silence. Some states like Zamfara and Kebbi that contributed substantially to his electoral success in 2015 have been deprived, but they can’t complain.”

Suggestions have been made that the government should release similar appointments during the tenure of Jonathan (2010-2015), for comparison.

I didn’t ask for Nnamdi Kanu to be starved during my...