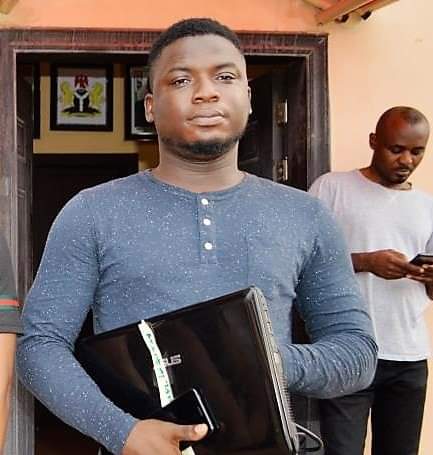 Toheeb, who claimed to be a final year student of the Ibadan Polytechnic was found guilty of a one-count amended charge of sending indecent images through his email address, and was accordingly convicted and sentenced to five months in prison by Justice Patricia Ajoku of the Federal High Court 1, Ibadan.

He had employed the trick to defraud people, especially foreigners before his arrest and prosecution by the commission.

According to the charge sheet, the offence for which he was arraigned, is contrary to Section 24 (1)(a) and punishable under Section 24 (1)(b) of the Cyber Crimes (Prohibition, Prevention Etc) Act, 2015.

The EFCC had initially arraigned him on a two-count charge on April 30, but the charges were amended to reflect the conditions of the plea bargain agreement he reached with the Commission.

Dated May 17, 2019 and filed same day, the plea bargain agreement proposed a five months jail term, payment of $350 (Three Hundred and Fifty United States Dollar) to his victim as restitution, and forfeiture of items recovered from him to the Federal Government of Nigeria.

Above all, Toheeb agreed to plead guilty to the amended charge as proposed to the court.

All the conditions were met during the resumed session of the court on Monday, leading to the conviction of the accused person.

The convict, who was earlier arraigned on May 22, 2018 before Justice Munta Abimbola, the Oyo State Chief Judge and presiding jurist in Court 1, was originally facing nine-count offences that border on obtaining money by false pretence and forgery.

The former offence is contrary to section 1(2) of the Advance Fee Fraud and Other Fraud Related (Offences) Act, 2006 and Punishable under Section 1(3) of the same Act, while the latter contravenes Section 467 of the Criminal Code.

Due to the exigencies of time, his case was transferred to Justice Akintola’s Court 9, where he was eventually convicted.

Before the Monday session, Adisa had approached the prosecution for a plea bargain.

The request was granted and the two sides settled for a re-arraignment on a one-count amended charge upon which he was jailed.

As part of the conditions for the acceptance of the plea bargain, the convict has restituted to the victim of his fraud the sum of N1,405,000 (One Million Four Hundred and Five Thousand Naira).