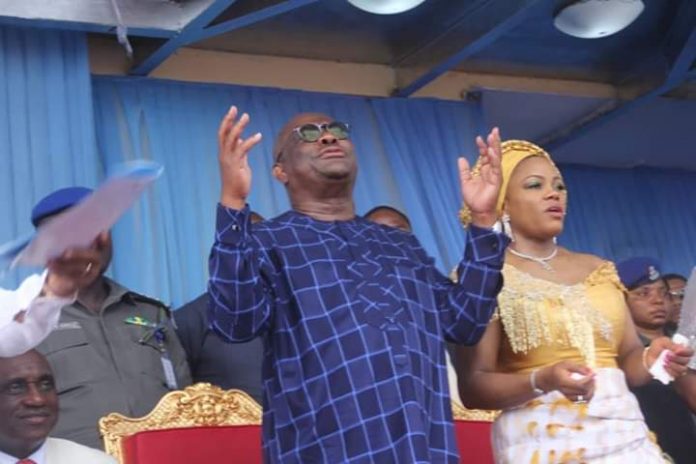 Rivers State Governor, Nyesom Ezenwo Wike has stated his re-election was as a result of God’s miraculous intervention in the face of internal and external conspiracy to truncate the will of Rivers people on March 9, 2019.

Addressing the State Victory Thanksgiving Service for his Electoral Victory on Saturday at the Yakubu Gowon Stadium in Port Harcourt, Governor Wike stated that a few PDP governors worked with the opposition to ensure that the PDP was cheated out of her victory in Rivers State.

He said: “The fight was not just with the opposition. It was also within our party . When we lost the election in Ekiti State, one of our leaders in the South West said that Fayose is finished and the next person is Wike.

“Some governors within the party joined forces with the opposition against the State. But then, the will of God prevailed. I was not bothered by what the opposition did, but what some of our party members did was worrisome.

“Some persons working with us in the state betrayed. They felt there was no way that we would make it. They became agents of the opposition. But God intervened “.

Governor Wike commended the clergy and Rivers women for standing by him and the PDP all through the electioneering process. He said that their support ensured that the PDP emerged victorious.

“Our women showed so much concern. Some of them were ready to die because of our election. I don’t know how to thank them.

“For the first time, I saw women like Aba Women riot, coming out to say no, we will not agree. Let me assure you that I will not disappoint the Christian community in Rivers State “, he said.

The Governor assured Rivers people that he will work like a first term Governor, delivering on his pledges. He said that his performance will not be affected by the second term syndrome.

He reiterated that he is committed to the olive branch that he extended to the opposition in the State. He said that it was done to promote peace and not out of fear of political fight.

He said that the State Government will not abandon the families of courageous Rivers people who died in defence of democracy. He praised the PDP Governorship Election Collation Agent, Dr Ferry Gberegbe who was murdered by the Federal Special Anti-Robbery Squad for defending democracy.

Governor Wike singled out his wife for praise on the positive roles she has played in sustaining his family.

Former Rivers State Governor, Dr Peter Odili said that without God’s intervention, Rivers people would not be on ground for Thanksgiving.

He called on Rivers elders to unite and work for the restoration of peace in the state. Odili noted that power comes from God, hence all leaders should support Governor Wike to move the state forward.

“Power comes from God. Therefore, we must all stand behind our leader and governor. Enough is enough. It is time to work for the growth of Rivers State “, he said.

PDP National Chairman, Prince Uche Secondus said that the states of the Niger Delta were under siege by the authorities during the elections.

He said that it was God that delivered Rivers State. He said that God confounded the Army Commanders and secular authorities to ensure the victory of Governor Wike.

“It was written in Abuja. They issued several press statements. Security agencies and generals stood, but who can beat the Army of the Lord. They planned to take Rivers State by Force, but they excluded God from their plans. It was the power of God that delivered Governor Wike. When the Army Commanders took over, God intervened”, Secondus said.

Senator Mao Ohuabunwa declared that PDP Senators will work with Governor Wike at all times. He said that they will continue to give him unflinching support to deliver on his mandate.

In a sermon, Pastor David Ibiyeomie of Salvation Ministry said that an attitude of Thanksgiving provides a platform for development. He said God deserves gratitude for the blessings He bestows on the State.

He prayed for Peace to be restored in Rivers State through the direct control of God.

A minute silence was observed for all those who lost their lives defending democracy in Rivers State. Praise Session was led by Chioma Jesus and Sensational Bamidele.

Senior Clerics prayed for Rivers State, Governor Wike , Deputy Governor Ipalibo Harry Banigo, the peace of the state and the souls of those killed during the elections.