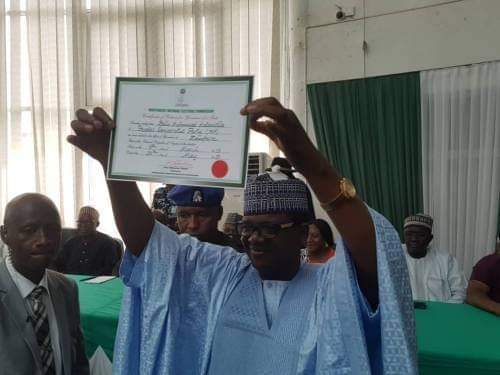 This was made known on the commission’s official Twitter Page on Monday.

The tweet reads, ”Presentation of Certificates of Return to the Winners of the 2019 Zamfara State Elections @ The Electoral Institute, Abuja.”

Recall that the ruling APC on Friday lost its bid to govern Zamfara State for the next four years as the Supreme Court ruled that it did not conduct valid primaries field candidate for the 2019 general elections.

Also, the apex court validated the judgement of the Court of Appeal, Sokoto Division, which gave the verdict that no valid primaries were conducted by the APC in Zamfara State.

Further, the Supreme Court, in a unanimous judgement by a seven-member panel, decided that a party that had no valid candidate cannot be said to have emerged winner of the recently conducted general elections.

In an appeal filed by the APC, the apex court ruled against the appellant and ordered a fine of N10 million against the APC.

2023 Presidency: Only Jonathan can consolidate on Buhari’s achievements – Group