The FIFA U17 World Cup taking place in Brazil, the Golden Eaglets of Nigeria will tackle Hungary in the opening game in Group B.

On tuesday, The five – time world champions touched down in Goiania from Sao Paulo, the city they had their training tour and the team swung into action with training session in preparation for the class against the East European side.

Manu Garba, the team Coach and his assistants have restated their determination to ensure a successful outing and making sure that no stone is left unturned as they continue to impart tactical and technical knowledge to the players ahead of the game against Hungary.

Manu Garba who described the Hungary tie is very important tie said that “winning the opening game is crucial in building the confidence level in the team.” 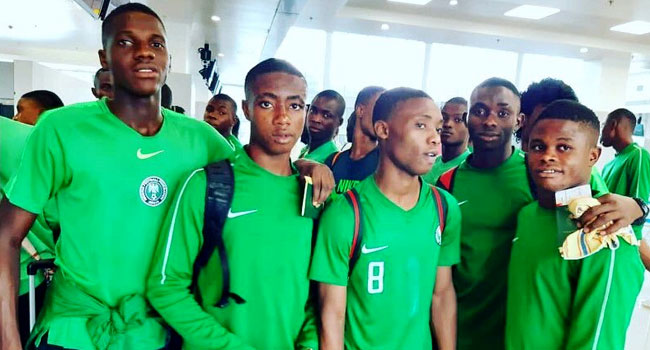 “We are looking forward to the game against Hungary with great expectations of having a good game and winning the maximum points at stake,” he stated.

Speaking further, Manu Garba said: “Any team from Europe that qualified for a tournament like this, must definately be a good side, but we will approach the game with every seriousness it deserves to give Nigerians back home something positive to cheer at the end of 90 minutes.”

Both teams are not new to each other as the Golden Eaglets defeated Hungary 3-1 at the quarter – final stage of the maiden edition of the tournament in 1985 enroute to becoming the first country to win the tournament, after the team defeated Germany 2-0 in the final.

The quest for the Eaglets to conquer the world again begin in few hours time and dispatching Hungary will indeed be a strong display of intent towards winning a sixth world title, after victories in 1985, 1993, 2007, 2013 and 2015.

In the group phase, Nigeria will also play Ecuador and Australia.

National Assembly will commit itself more to repositioning sports – Dogara