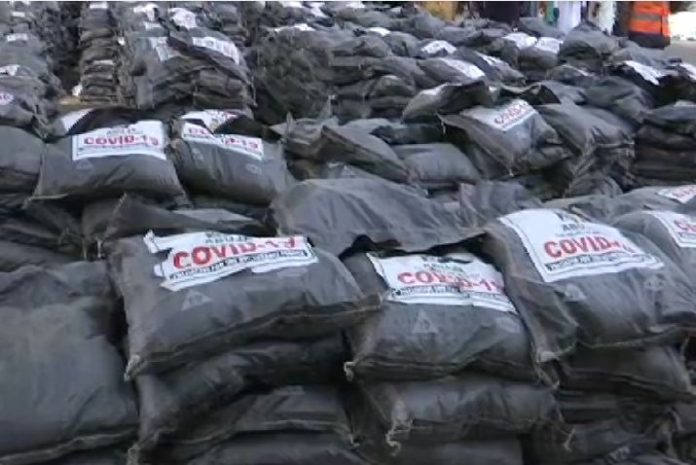 The decision of many states and the FCT to lockdown their territories in order to contain the spread of the coronavirus pandemic in the country, has made day to day living difficult for many poor and even middle income
families
States like Lagos, Kaduna, Kwara, Osun, Abia and many others have made palliatives available to their citizens in order to mitigate the hardships brought about by the lockdown and lack of access to basic sources of income

The Federal Capital territory has now joined the states in Nigeria that have done this.

Thousands of bags of food items are displayed at the Abuja Arts and Culture ground at the city centre. They are to be shared to the very poor residents of the FCT.

The FCT Administration has adopted a method of sharing that will ensure transparency and that the most vulnerable, who are the targets, will get the palliative.

A supervising team from the FCT comprising women, religious groups, civil society organisations, traditional, media and security operatives has also been set up as part of measures to ensure the food doesn’t get diverted.

The gesture is expected to restore confidence in residents and convey to them, the importance of the stay-at-home measures instituted by the federal government.

This is coming in the wake of an alarming spike in the number of confirmed cases in in the FCT over the past few days due to community transmission. FCT Administration promises transparency in the sharing of food palliative care