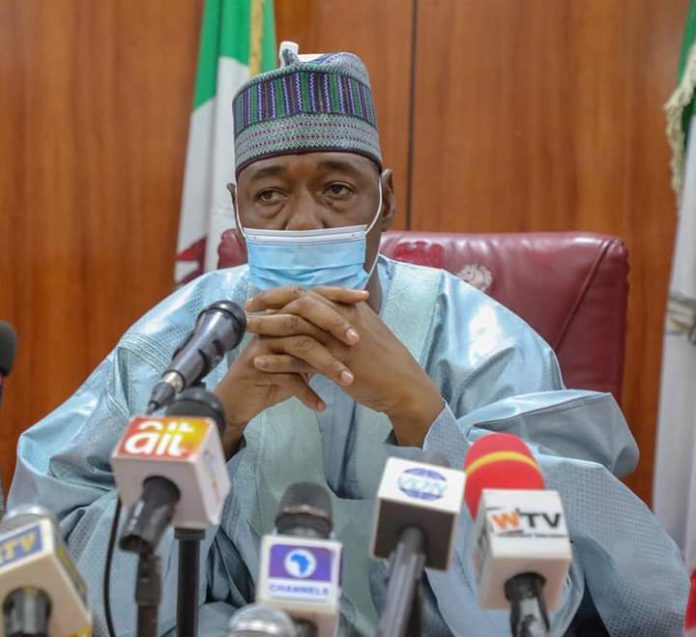 Zulum made the observation when presidential delegation led by the President of the Senate, Dr. Ahmed Lawan visited him on Monday in Maiduguri.

The delegation was in Borno, on behalf of President Muhammadu Buhari and the Federal Government, to commiserate and identify with the family of the victims, the Government and the people of Borno State over the incident.

6 key recommendations which if implemented will solve a decade long insurgency in Borno Zulum said, these are ;

1.Ensure immediate recruitment of Borno youth into the armed forces to supplement the military.

2.Ensure the engagement of services of neighbours, Chad, Niger and Cameroon in clearing the remnants of the insurgents along the shores of Lake Chad.

3. Engage the services of mercineries to clear Sambisa game reserve.

4. Provide mine resistant armoured carriers and other equipment to the military and para military.

5. Support the state government in repatriation of refugees in Niger and Cameroon.

6. Increase the means of livlilhood to the people of Borno.

“After 11 years, insurgency still persist, We have made those recommendations for Mr President’s kind consideration, kindly assist in ensuring that our recommendations have reached to the President.” Zulum said.

Governor Zulum noted that, the north eastern governors have discovered after their meeting last week in Yola, only 45 billion naira was appropriated to the entire region in 2021 budget proposal sent to the national assembly.

“To the national assembly, Mr President North East Governors Forum held it’s meeting in Adamawa last week, we have analysed the 2021 budget proposal. We have discovered that only a paltry sum of 45 billion naira allocated to the entire North East, which constituted only 0.32% of the total budget. Only 45 billion naira allocated for capital expenditure, Mr President with due respect, the correlation between peace and development need not to be overemphasized. With such a budgetry provision peace in the North East will be a nightmare.” Zulum said.

The Governor added, “God has given you the position to become the Senate President, you are from the North East, the Chief Whiph of the National Assembly is from Borno State, the Chairman appropriation committee is also from Borno State. We are demanding for Justice, fairness and equity.”

“If our major roads are rehabilitated and reconstructed, believe me sincerely the insurgency will be reduced by about 65%. This has been one of our major problem.”

“Furthermore, we also noted a complete absence of budgetry provision with respect to the Mambila power project in the year 2021 budget.”

“Another issue is in respect to COVID-19 stimulus, federal government budgeted the sum of over 3 trillion to tame the impact of COVID-19 pandemic. Your Excellency till this moment no MDA has contacted any state in the North East.”

“We are completely shortchanged, Your Excellency, it is disheartening to note that sequel to the end SARS protest, I have observed the reaction by Nigerians including the national assembly members. people are calling for a compensation to those killed across the nation, thousands of people were killed in Borno State, and indeed in the entire North East region, nobody ever attempted to provide any compensation to anyone.”

“That is the reason why, when national economic council resolved for states to constitute a judicial council i refused to do so and i will not do it. Nobody has ever said judicial commission of enquiry should be set up, either by state government or federal government to investigate the activities of Boko Haram and the excesses of the Nigerian military in the state, sabotage among others.”

“This morning before you came in, i have watched in TVC that the Chief of Naval Staff is inaugurating projects to improve the welfare of the logistics command in Ogara. While we have been pleading to the Chief of Naval Staff for the last two years for them to re-establish their base in Baga, they need a very small amount, but up to now they refused to heed to our own request. With this circumstances, people should take note that peace in Borno State entails peace in the North East.”

“Believe me sincerely, when Borno falls the entire country will be consumed.”

Earlier, the President of the Senate, Dr. Ahmed Lawan has commiserated on behalf of President Muhammadu Buhari with the government and people of Borno State on the recent attack on farmers by gunmen suspected to be members of Boko Haram.

The Senate President assured of the Federal Government’s commitment to ending the insurgency in the northeast and Borno in particular.

He also said, the President has ordered the Nigerian Military to take the fight against insurgency to their enclaves in a sustained manner.

The delegation, led by Governor Babagana Umara Zulum paid a visit to the Shehu of Borno, Abubakar Umar Garbai Elkanemi and later to Zabarmari to condole with the families of the slain farmers.