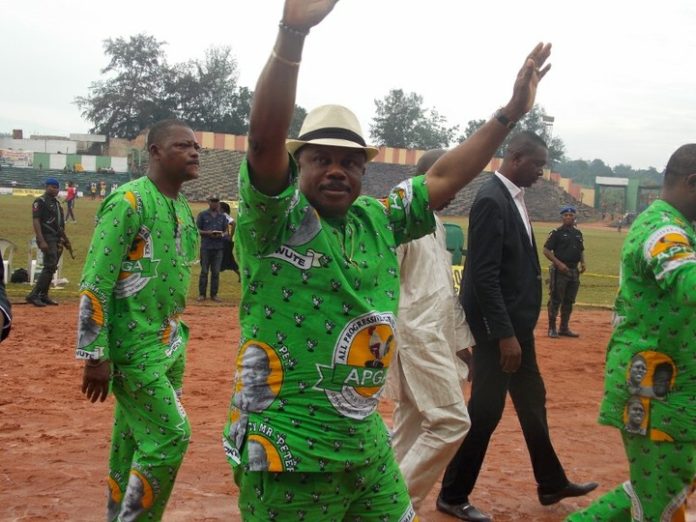 The son of late Biafran leader and founder of the All Progressives Grand Alliance (APGA), Chukwuemeka Ojukwu, has attacked his late father’s wife, Bianca over claims that the Anambra State Governor, Willie Obiano cannot replace her husband.

Bianca Ojukwu had recently attacked APGA over plans to name Obiano as the leader of the party, on the premise that he knows nothing of the ideals and ideology that prompted her late husband to found APGA.

But her late husband’s son, Ojukwu Jnr in a statement insisted that some of the claims made by his father’s wife over what his father told her were lies.

“I would have taken a pass on the insinuations, innuendos and outright falsehoods made in the interview. I find it exigent from the perspective of an insider, to present the truth so as to preserve and protect the ideals that my late father and mentor held sacred.

“Given his standing by birth, heritage, disposition and calling, Dim Chukwuemeka Odumegwu-Ojukwu never shied away from fully expressing his feelings, observations and apprehensions. As a matter of fact, he documented his views concerning Biafra and Nigeria in books and live interviews for ease of reference. Any attempt, therefore, to recast or present his views regarding Biafra or Nigeria without proper references should be considered dead on arrival.

“Claims therefore of what the legend told or did not tell the claimant (Bianca) about Biafra/Nigeria, should be regarded as the views of the said claimant, in pursuit of what, I don’t know.”

Speaking on claims that his father disparaged Obiano, Ojukwu Jnr said, “I do not need to be tutored in the proclivities, idiosyncrasies and mannerisms of my late father. As such, I, therefore, make bold to state without fear of contradiction that the Dikedioranma Ndigbo I know, never equivocated.

“If he had something worthwhile to say on a subject (Obiano), he would have stated it on record and not passed it through any intermediary. He took the challenges of life with equanimity and the brinkmanship that comes with the discipline of elite military training.”

Ojukwu Jnr also took a swipe at some members of APGA who had said the party would stop using the image of the late party leader to canvas for votes. He said he had worked sufficiently with Governor Obiano and the national chairman of the party, Victor Oye to know that they hold Ojukwu in high esteem and would not disparage him.