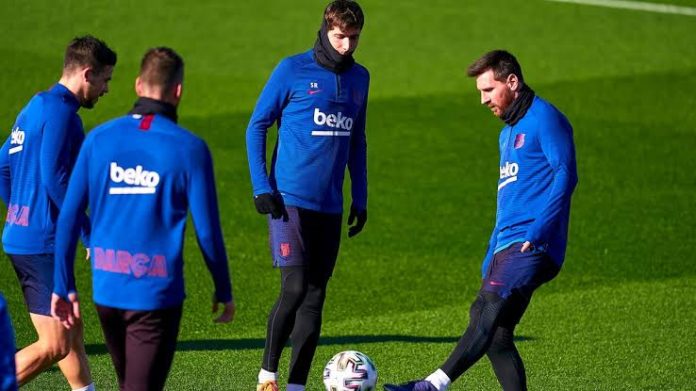 Two members of staff at Barcelona have tested positive for COVID-19, causing training to be axed ahead of their clash with Athletic Bilbao.

Barcelona have postponed their training session on Tuesday following an outbreak of coronavirus at the club.

The Catalans are preparing for a trip to Athletic Bilbao at San Mames in La Liga on Wednesday, but their morning training session on Tuesday has been halted ahead of all players and staff being tested for Covid-19.

Two members of the club’s staff have provided positive coronavirus tests and the club need to find out if there are any further cases.

“After PCR tests carried out today (Monday) two members of the football first-team staff have returned positives for Covid-19,” Barcelona said in a statement on the club’s official website . “The club has informed the relevant sports and health authorities. Furthermore, the whole squad will undergo further PCR testing on Tuesday morning local time in line with La Liga protocol.

“As a result the training session planned for tomorrow (Tuesday) at 10:00am (11:00am CET) has been postponed. The new time for training and the subsequent press conference ahead of Athletic Club v FC Barcelona will be announced tomorrow.“

Barcelona are looking to build on their win over Huesca at the weekend, which came courtesy of a goal from midfielder Frenkie de Jong.

Ronald Koeman’s side are on a run of six games on the spin without defeat in La Liga, but two of those have been home draws against Valencia and Eibar.

Barca head into their game in Bilbao sat in fifth place in La Liga, 10 points adrift of Atletico Madrid having played a game more than the table toppers.

Koeman is likely to be able to welcome Samuel Umtiti back into the fold, as he took part in Monday’s recovery session following the win over Huesca.

The France international defender missed the win over Huesca and was an unused substitute against Eibar on account of a stomach complaint, but is expected to feature in the travelling party to Bilbao.

One player who will not travel is Ansu Fati, who is recovering following a knee procedure.

The club issued an update on his status on Monday, saying he had undergone a “ regenerative biological treatment” and that he remains on course to be fit in the spring.

Reason i will knock Anthony Joshua out in 3rd round –...