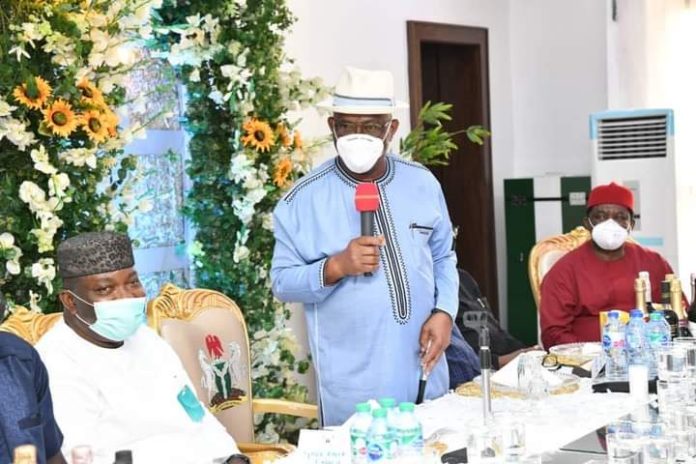 He said winning the November governorship election in Anambra is critical to the PDP and concerted effort must be made to ensure that nobody is alienated in the processes leading to the election of the party’s flagbearer.

The Rivers State governor made this remark while addressing PDP leaders in the South East during a meeting held in Enugu on Monday to reconcile Anambra stakeholders ahead of the November election.

He explained that he was in Enugu, the capital of Enugu State to commiserate with Governor Lawrence Ifeanyi Ugwuanyi and former Deputy Senate President, Dr Ike Ekeremadu, over the death of the State’s former Commissioner of Transport, Mathias Ekweremadu, but was notified of the meeting by the State governor who also urged to stop by and speak to delegates at the Government House.

Governor Wike stated that the November election offers the PDP a rare opportunity to retake Anambra State and consolidate the party’s grip in the South East geopolitical zone. And to achieve this, the governor said people must be willing to make sacrifices in the overall interest of the PDP.

“Let us have party interest, not group interest and put everything aside. Anambra use to be a PDP state but because of wrangling and not giving in, that is what has made PDP to lose Anambra. Only two States in the South East which are Enugu and Abia are PDP today. If we add Anambra, it is a good boost for us.”

He warned that if PDP fails to win Anambra state it will not augur well for the party particularly in the South East. To this, he urged the National Working Committee of the party to allow governors to oversee both the conduct of congresses and governorship primary in Anambra.

“It must be done transparently. Whether the Congresses or the primary itself, the governors will be in charge to come and do the election.”

He said adherence to the suggestion that PDP state governors be allowed to oversee the conduct of the congresses and primary will serve as a test case to determine whether the National Working Committee is serious about PDP winning Anambra election.

Governor Wike specially charged the PDP National Organising Secretary, Col Austin Akobundu (rtd), who was present at the meeting, to ensure that processes leading to election of a PDP candidate in Anambra is done transparently to give people confidence that the party means well for all.

“You have a critical role. Luckily you’re from South East, tell them that look if we lose Anambra, there is problem for us in the South East. And You know that APC is coming out strong to fight in Anambra State. So let us work together.”

The Rivers state governor assured the delegates that PDP governors will support the party in Anambra state to win the November election. According to him: “All of us are ready to give Anambra that support to win this election.”

Governor Wike appealed to those in court to withdraw their suit in the interest of the PDP. He further urged contending factions in Anambra State to reconcile and work in unison.

“In the name of God, everybody keep your ego, part of the problem is ego, let us work as a team and deliver PDP.”

FG Has No Active Data On Retirees, Says Ex-Minister