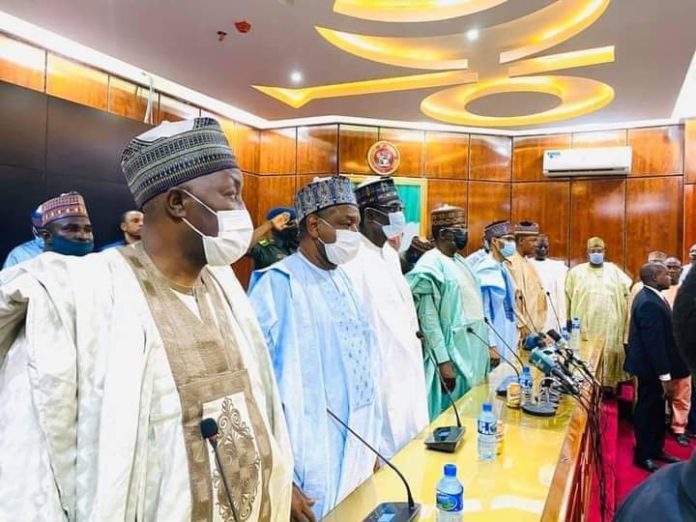 Some governors elected on the platform of the All Progressives Congress (APC) have visited Zamfara to condole with the government and its people over the fire outbreak at the Tudun Wada Central Market in the state.

The Chairman of the Progressives Governors Forum and Kebbi State Governor, Atiku Bagudu, led two of his colleagues – APC Caretaker Committee Chairman and Yobe State Governor, Mai-Mala Buni, as well as Governor Badaru Abubakar of Jigawa State to sympathise with Governor Bello Matawalle on Monday at the Government House in Gusau, the state capital.

Governor Bagudu told their host that they were scheduled to have visited Zamfara, which has the Peoples Democratic Party (PDP) as the ruling party, before now.

He lamented that the sad incident that happened at Tudun-Wada Market affected the livelihood of the victims and business activities in the state.

According to the governor, this informed the decision of the APC governors to show their concern and sympathy to the victims.

He commended and acknowledged the efforts of Governor Matawalle in ensuring the return of peace in the state, and announced that the APC governors have agreed to donate N50 million to the victims of the inferno.

In his response, Governor Matawalle commended the governors for travelling by road to express their brotherliness and love, despite their political differences.

He particularly appreciated the gesture which he noted his colleagues from the PDP have not done, saying it would be reciprocated.

The governor assured his guests that Zamfara would continue to open its doors to the APC, not minding the reactions their visit could attract.

Yet Another Assault On The National Assembly