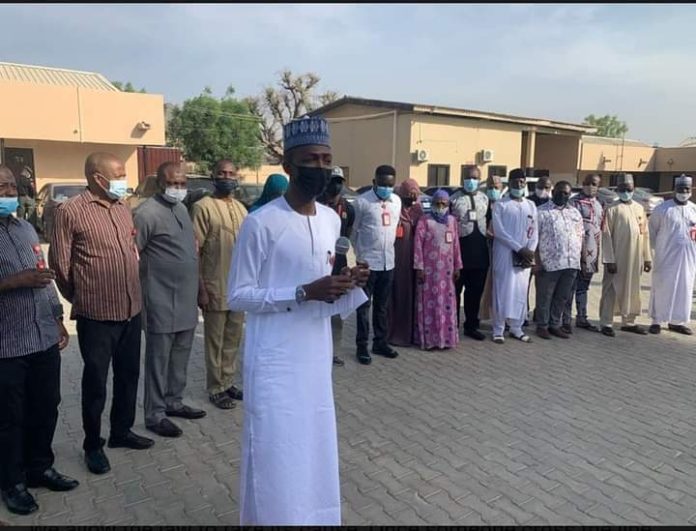 The Executive Chairman of the Economic and Financial Crimes Commission, EFCC, Abdulrasheed Bawa today April 10, 2021 reiterated the Commission’s commitment to fighting corruption within the ambits of the law.

The anti graft Czar who spoke in Kano, during his maiden visit to the Kano Zonal Office of the EFCC, recalled that, what distinguished the Commission at inception was strict adherence to the Rule of Law.

“There were no new laws that other law enforcement agencies were not empowered to enforce; the only thing that made EFCC unique, is adherence to the rule of law.

”We allow the law to take its cause. Once someone cross the line, we will do our job with civility and charge them to court to answer for their crime,” he said.

The EFCC Chair also charged the staff to adhere to the Commission’s core values which are: professionalism, integrity and courage, in the discharge of their duties. “EFCC was established based on the principle of courage, professionalism and integrity. That was the foundation that made the EFCC what it is today.

“There are pioneer officers of the Commission who have worked hard to make the EFCC what it is by sheer determination and courage and that is what we need to uphold and remember.
“We need to always remember where we are coming from so as to know where we are headed, ”he said.

Bawa urged the staff to renew their commitment to work in order to ensure the success of the Commission as the current administration has confidence in the Commission.

While not expecting perfection from the staff, Bawa said his appointment as chairman should inspire young officers to aim for greatness.

He further called the staff to shun indiscipline and corruption as such vices would not be tolerated in the Commission.

On the issue of reforming the Commission, the EFCC boss disclosed that he had set up committees to look at the issues of digitalization of the Commission’s database, Standard Operations Procedure, Staff welfare, among others.

He also assured that the Commission under his watch will be proactive in its approach to fighting corruption.