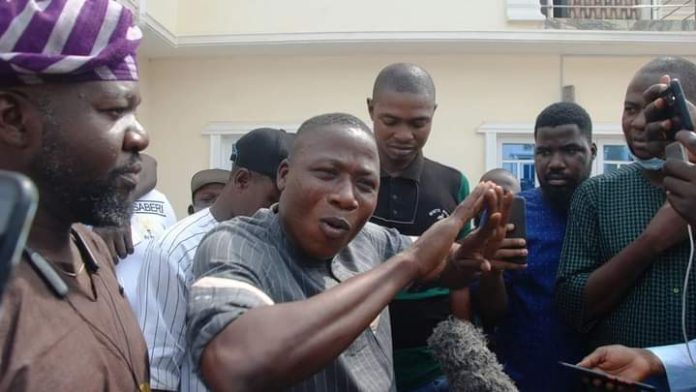 The embattled Yoruba nation freedom fighter, Sunday Adeyemo popularly known as Sunday Igboho may have slipped the line while in the struggle to ensure that the Southwestern Nigerians are treated with fairness and equity, leading to his current predicament, a section of Nigerians suggests.

Igboho’s struggle which led to his current ordeal began when he gave an ultimatum to the Fulani herdsmen in Oyo State and some other parts of the region to vacate the forests.

Recall that Sunday Igboho on January 16, issued a seven-day ultimatum to the Fulani community in Igangan, Ibarapa North Local Government Area of Oyo state, over allegations that they are responsible for the rising insecurity and kidnapping in the area.

Igboho made the declaration when he led some youths to the Sarkin Fulani of Oyo State, Alhaji Saliu Abdulkadir, to register their displeasure over the recent killings in the axis.

The action stimulated controversies across the country as much violence erupted leading to the death of scores of residents.

Subsequently, the secessionist declared the Oduduwa Republic as a sovereign nation for the Southwestern region over the alleged marginalization of the Yoruba people occupying Ogun, Osun, Ondo, Ekiti, Lagos and other states.

Igboho had successfully conducted peaceful rallies in most of the states including Lagos as a movement for the actualization of the Oduduwa Republic. The agitators staged a mega rally in Lagos State on July 3 despite opposition from the government and the security agencies.

Recall that the Department of State Security Services, DSS on July 1, invaded Igboho’s residence in Ibadan the Oyo State capital, gunned down some of his allies and took other activists into detention. He was subsequently declared wanted by the secret police.

The midnight raid followed allegations that the activist was in possession of firearms. DSS spokesman, Peter Afunaya while confirming the operation said the security agency recovered illegal arms, including seven AK-47 rifles and thousands of ammunition from Igboho’s house.

“On approach to the residence, the team came under heavy gun attack by nine men, suspected to be Igboho’s guards. Six of them were armed with AK-47 guns and three others with pump-action rifles.

The DSS accused Igboho and his group campaigning for self-determination, of been “well-armed and determined to undermine public order. The arrests and seizures are, no doubt, a confirmation of a grand plan by Igboho and his cohorts to wage a violent insurrection against the Nigerian state”.

It could also be recalls that the Oduduwa pioneer was recently caught in a video where he was seen talking to some community leaders and other stakeholders in the region to purchase guns for their youths.

According to him, “Those who don’t have guns, contribute money and buy guns for them. I am saying it. You can video me. If they don’t know where to buy gun, I will help them to buy them. Buy guns for them.

“No government can say nobody should carry guns this time. If they are caught with the guns, they should tell them (the authorities) that I, Igboho gave the guns to them. This video, post it that ‘Igboho bought guns for us’.

“They should not steal. The guns we bought are to protect ourselves. And we will fortify them with charms”.

Following the developments, the activist was on Monday, July 19 nabbed alongside his wife by the International Criminal Police Organisation at an airport in Cotonou, Benin Republic.

Igboho who is currently in the custody of security officials in Cotonou was arraigned for a hearing on extradition to Nigeria at the Court De’appal De Cotonou on Thursday.

The hearing was, however, adjourned to Monday, July 26. His wife was released by the authority

Some concerned Nigerians who spoke with newsmen on the issue, blamed the activist for “going too far” by acquiring weapons while agitating for the Yoruba nation.

A social media influencer, Mr Adewale Adegoke told newsmen that the activist may not have been hunted if he had continued with his rightful and peaceful agitation without indication of a crime.

“This man would have just continued to enjoy his money and the respect been accorded to him by the general public. All was well until he started talking about guns and killings”.

“Of course everyone has the right to agitate for separation but in a civil society like Nigeria, that can only be achieved without weapon”, he added.

A current affairs analyst, Mrs Ojonya Sylvester who spoke to newsmen from Makurdi, noted that Igboho should have learnt from the self-acclaimed leader of the Indigenous People of Biafra, Nnamdi Kanu who is also currently in the custody of DSS after been rearrested in an undisclosed country.

He said, “Igboho should have followed the steps of other agitators like Nnamdi Kanu. Kanu has never publicly said anything about purchasing weapons for killing anybody even though we all know that such exists.

“You don’t have to use force while trying to attract the attention of international communities towards your agitation. I think that is where he got it wrong. You don’t expect a government whether good or bad to fold its arms and allow such to take place. No. You don’t do agitation by force”.

Meanwhile, a civil servant in the Federal Capital Territory, FCT who pleaded not to be mentioned, said Igboho’s actions were birthed by the influence of bad governance.

He said, “If Nigeria is working and everybody is been treated equally, no one would be agitating for separation. It is accumulated provocation that is leading to all this agitation here and there.

“If the Federal Government is angered by the activities of the agitators, they should fix the country, tacked the security challenges, make the economy work again.

“You can’t stop the agitation by merely arresting everyone when there is hardship in the land. Tackle the cause first”.