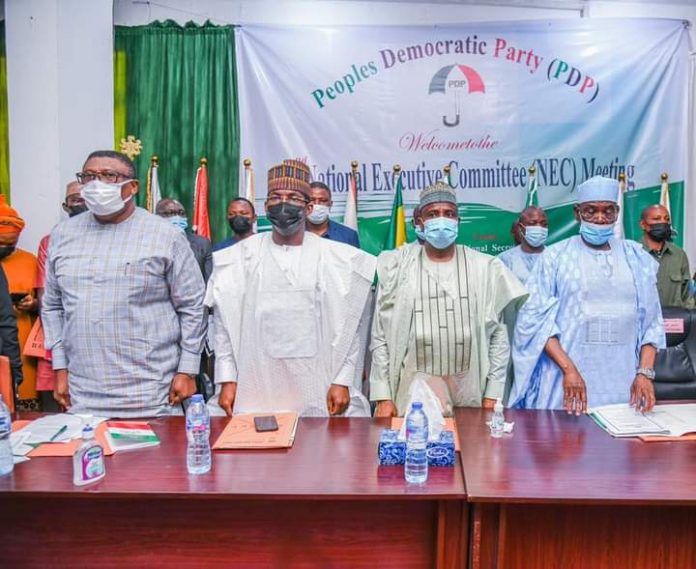 The People’s Democratic Party National Executive Council has ratified the October 30th Convention date picked by the National Caucus during its meeting on Friday.

The meeting while deliberating the recommendation of the National Working Committee draft time table for the 2021 Elective National Convention on Saturday, also approved Abuja as venue for the Convention.

Rising from its 92nd NEC held at the Wadata Plaza national secretariat on Saturday, National Publicity Secretary of the party, Kola Ologbondiyan said the meeting also agreed to meet on September 9th to review and adopt the zoning of National Offices and to announce membership of the Convention Planning Committee.

Earlier in their separate messages, the PDP Acting Chairman Elder Yemi Akinwonmi, BOT Chairman Senator Wali Jibrin, Chairman PDP Governor’s forum, Aminu Waziri Tambuwal, Senate Minority leader Enyinnaya Abaribe and former Vice President Atiku Abubakar and 2019 Presidential candidate commended the conciliatory mechanism of the party that has helped in resolving the leadership crisis that engulfed the party, saying it is now over.
The Speakers also commended the development revolution of the Governors in their various States, describing it as awesome, while also taking a swipe on the APC led Government over the worsening security situation of the country and the economy which they noted is at its lowest ebb.

They urged members of the party and Nigerians to remain focused and not lose hope as leadership continues to work out its strategy for a come back, stressing that PDP cannot afford to fail Nigerians.
Governor Ahmadu Umaru Fintiri of Adamawa State led the State delegation to the meeting.

Don’t Allow your NIN to be Linked to Another Person’s SIM...