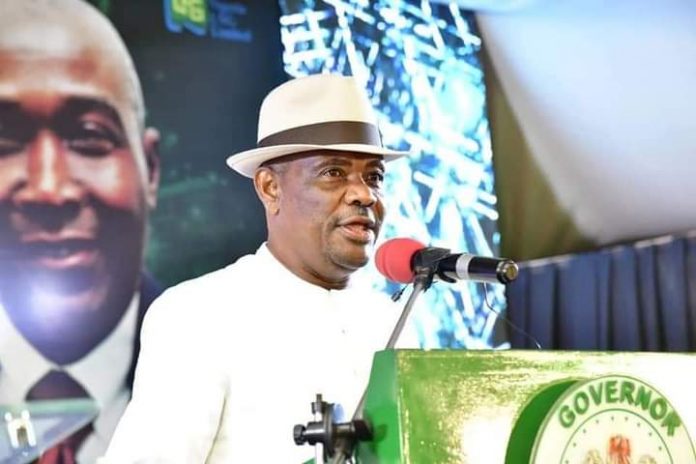 Governor of Rivers State, Nyesom Ezenwo Wike has blamed the delay in completion of the N120 Billion Bonny-Bodo road on failure of the Federal government to pay N60 billion counterpart funding for the project.

He asserted that every fund expended so far on the Bonny-Bodo road project had been provided by the NLNG.

Governor Wike stated this at the sendoff ceremony of former NLNG managing director, Tony Attah, which held at the company’s corporate headquarters in Port Harcourt on Saturday night.

The governor, who was accompanied by the Governor of Edo State, Godwin Obaseki, maintained that since the N60 Billion counterpart fund for the 38 kilometer Bonny-Bodo road will be paid from the federation account, it will be wrong for the federal government to continue to claim glory for the funding of the project with the Nigeria Liquefied Natural Gas, NLNG.

The Rivers state governor noted that if the federal government was committed to the even development of all parts of the country, it ought to have provided the N60 Billion counterpart funding for the speedy completion of the Bonny-Bodo road.

“If this country is a country that all of us belong to and all of us mean well for ourselves, that is one project that ought to have been completed by now, because of the economic interest that will benefit all of us.”

He eulogised Mr. Attah for the convivial relationship the NLNG under his watch maintained with the government and people of Rivers State.

The governor said Attah will be remembered for overseeing the commencement and completion of NLNG corporate headquarters building in Port Harcourt and for ensuring that all fabrication works for the company’s $10 billion Train 7 were done in Rivers state.

According to him, 7.5 percent Value Added Tax from the NLNG Train 7 project, will be used to transform the State.

Based on the convivial relationship Attah nurtured and sustained with the State government, the governor said it is also possible for all those working for the International Oil Companies, IOCs to cultivate better relationship with State governments in the Niger Delta.

The governor remarked that by ensuring the speedy completion of the NLNG headquarters in Port Harcourt, Mr. Attah had proved that the claim of insecurity in the Niger Delta by IOCs is indefensible.

The governor declared that posterity will forever be kind to Attah for all his good deeds as the managing director of NLNG.

According to him, any government that is committed to the development of the country must engage technocrats like Mr. Attah.

The governor enjoined the new NLNG managing director, Dr. Philip Mshelbila to emulate his predecessor and sustain the existing cordial relationship with the state government.

He implored Dr. Mshelbila and the board of the NLNG to collaborate with the Rivers state government to develop a vast reclaimed expanse of land opposite the NLNG corporate headquarters in Port Harcourt.

“Everybody should come back here. This is where it is happening. Philip, opposite you, we have sand filled the area, provided infrastructure. Come and partner with us. Chairman (NLNG board, Edmund Daukoru, the Amayanabo of Nembe) you are from Niger Delta, tell your people to come and get a place here. They should not be living in Lagos and flying in and putting the cost on your head. Let them come here. The safest place is here. Rivers state is very safe.

The governor used the occasion to reaffirm Rivers State government ownership of OML 11 which was formerly operated by Shell Petroleum Development Company.