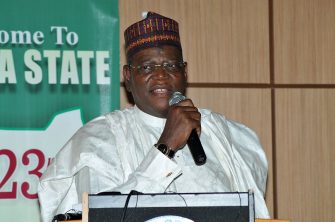 A chieftain in the main opposition People’s Democratic Party (PDP), and former Governor of Jigawa State Alhaji Sule Lamido said it is not possible for the party to zone its presidential ticket to the south in the coming 2023 election.

Lamido stated this in his interview with BBC Hausa service today.

He said it would not be possible because of the personal interest of some few individuals.

This followed the decision of the PDP Zonal Committee, chaired by Governor of Enugu State, Ifeanyi Ugwuanyi, to position the office of the PDP National Chairman to North.

The decision prompted many speculations that the decision is meant to zone the presidential ticket to the south.

Although the committee said the zoning of the office of President and Vice President is not part of its mandate.

While reacting to the development, Lamido said it may not be a problem if the decision is meant to revive the acceptability and popularity of the party in the northern part of the country

Lamido said but if the decision is meant to zone the 2023 presidential candidate to the southern part of the country that would not be acceptable.

“What brings this issue is because the southern PDP and APC Governors agreed that president most comes from the Southern part of the country.

“There is no compulsion in politics everybody has equal rights and if you said you want your own, so everybody has his own as well.

“This happened 20 years back when PDP picked Obasanjo and prevented any candidate from North but it was done not by force is because it’s the solution to the country’s situation and for the future, progress and peaceful coexistence of the whole country,” Lamido stated.