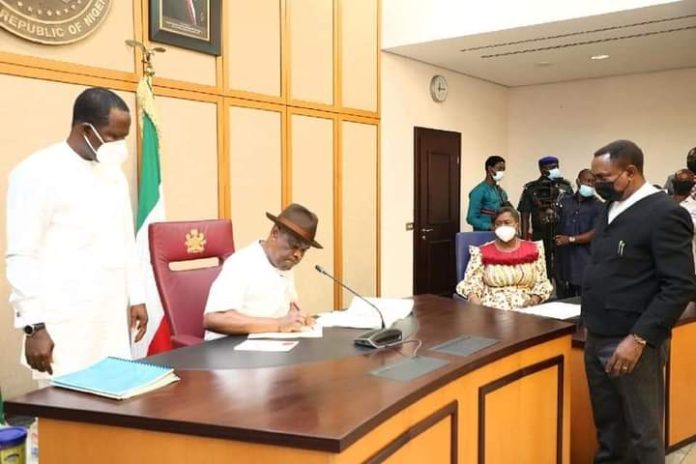 Governor of Rivers State, Gov Nyesom Ezenwo Wike – CON , says the provision of personal homes to judicial officers of Rivers’ extraction will serve as good motivation to resist enticements of all forms capable of compromising the rectitude of their judicial functions.

He stated this on Tuesday at the Government House, Port Harcourt, after signing into law two bills passed by the Rivers State House of Assembly, and presented to him by the Majority Leader of the House, Hon. Martins Amaewhule.

Governor Wike pointed out that the law will contribute to promoting judicial independence and reduce all forms of corruption among judicial officers.

“The second bill which I’ve assented to, has to do with the housing scheme. This is where I think, when we talk about autonomy, this is the main autonomy the judiciary should be talking about.

“And in carrying out judicial functions, one thing that gives people hope is shelter. Part of the reasons why people are corrupt is that they don’t have the opportunity to own a house where they can put their heads at the end of the day, at retirement.

“So, for us as a government, we believe that one of the things that we do to stop corruption is to allow them to have their own house.

“Government must from the day of appointment, and on retirement, ensure they have their homes. If they say, they don’t want, then government can pay them the due financial equivalent in lieu. But it is our own responsibility to do so.”

Governor Wike explained that all judicial officers of Rivers origin serving in the State and Federal judicial system are entitled to benefit from the accommodation that should be provided.

According to Governor Wike, the initiative is novel and different from what Lagos State had done that only catered for their judges servicing within the State and not extended to the federal judicial system.

“It’s one profession that the moment you’re retired, there’s nothing you can do about the practice of law. If a medical doctor retires from civil service, the medical doctor can go into private practice and own his or her own hospital.

“Wherever you are doing your work, you have no reason to complain because you have a home at the end of the day. So, why will any body come to entice you for anything. And since it is not provided in the federal scheme of work, we have to care for our own people whether working here or outside.”