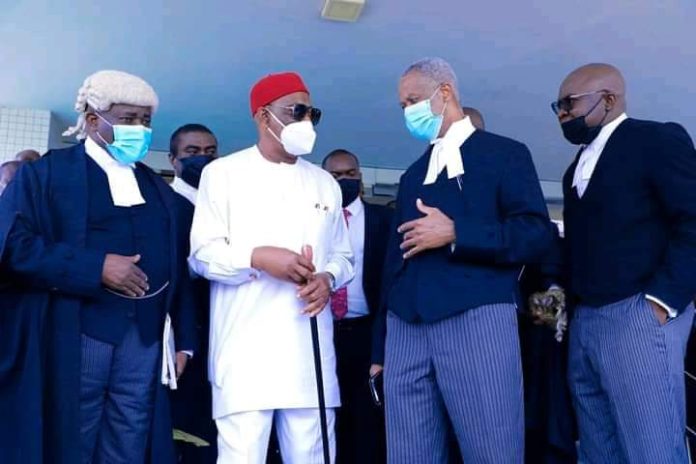 The Supreme Court order of injunction restraining the Federal Government and its agencies from ceding oil wells in Akri and Mgbede, Rivers State to Imo State, still subsist.

At the court session on Monday, the Attorney General of the Federation and Attorney General of Imo State suffered setback, as the Supreme Court tacitly did not take an intended motion to set aside the exparte order restraining federal government and its agencies from ceding oil wells, located in Akri and Mgbede communities, to Imo State.

The counsel to the Attorney General of the Federation, Remi Olatubura and Attorney General of Imo State, Olusola Oke had wanted their motion challenging the jurisdiction of the Supreme Court to hear the matter to be heard, but the counsel to Rivers State government countered led by Emmanuel Ukala, SAN, with a motion for direction to streamline all the other motions.

The Supreme Court seven-member panel of justices led by Kudirat Kekere-Ekun, adjourned the matter to January 17, 2022 to hear the substantive matter.

Speaking to journalists outside the court, counsel to Rivers State government, Sebastian Hon, SAN, said the matter was adjourned to 17 January, when all interlocutory application will be withdrawn and the substantive matter heard.

“There is a boundary dispute with respect to some oil wells against Imo State. But we joined the Attorney General of the Federation who is a necessary party, because of the regulatory bodies like the National Boundary Commission, the Revenue Mobilisation and Fiscal Allocation Committee, etc that are federal agencies.

“Basically, it is a dispute that borders on some oil wells which Rivers State is claiming belongs to it. They (defendents) said the court ought to have taken their motion challenging jurisdiction first, but we said no, we have a motion for direction to streamline all the other motions.

“Then the court said instead of wasting time, let’s wait till January to hear the substantive matter. Everything will be taken on that day. They (defendents) actually wanted the court to quash the injunction, but tacitly the court refused to go into that.”

Rivers State government had filed a suit against the Attorney General of the Federation and the Attorney General of Imo State before the Supreme Court, asking for a declaration that the boundary between Rivers State and Imo State as delineated on Nigeria’s administrative map, 10, 11 and 12th editions and other maps bearing similar delineations are inaccurate, incorrect and do not represent the legitimate and lawful boundary between Rivers and Imo.

Rivers, through its Attorney General also sought a declaration that the country’s administrative map 10, 11 and 12th editions and other maps bearing similar delineations with respect to the boundary between Rivers and Imo, are unlawful and void, and cannot be relied on to determine the extent of the territorial governmental jurisdiction of Rivers State and to determine the revenue accruing to the State from the federation account, including the application of the principle of derivation and other revenue allocation principles as contained in the 1999 Constitution.

Inspection of Flyover Bridges: I Have Not Disappointed Rivers People –...