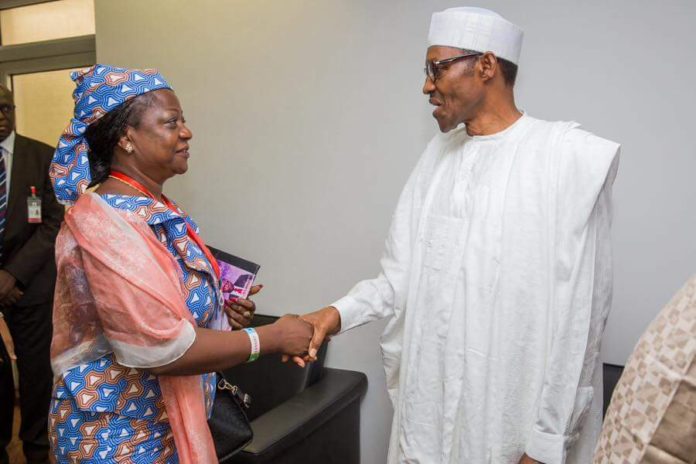 The hope of Lauretta Onochie, the Senior Special Assistant to the President on New Media, becoming a National Commissioner of the Independent National Electoral Commission (INEC) deemed yesterday.

President Muhammadu Buhari has re-nominated Mrs. May Agbamuche-Mbu from Delta State (Southsouth) as a National Commissioner of INEC.

The President had nominated Ms. Onochie, also from Delta State, to represent the Southsouth in INEC.

President Buhari’s earlier nomination of Onochie was greeted by widespread criticism, following accusations that she is a card-carrying member of the ruling All Progressives Congress (APC).

The Senate had, in rejecting her nomination, hinged it on the fact that her nomination violated the Federal Character principle since there was already a serving INEC National Commissioner from Delta State – Mrs. Agbamuche-Mbu – in the commission.

“Therefore, based on the provisions of Section 14(3) of the 1999 Constitution of the Federal Republic of Nigeria (as Amended) on Federal Character Principle as earlier stated, and in order for the Committee and the Senate to achieve fairness to other states and political zones in the country, the committee is unable to recommend Ms. Lauretta Onochie for confirmation as a National Electoral Commissioner for the INEC,” Chairman of the Senate Committee on INEC, Kabiru Gaya, had said.

Besides Mrs. Agbamuche-Mbu, President Buhari also urged the Senate to confirm five other nominees for appointment as National Commissioners and another nominee as INEC’s REC.

The request was contained in a letter, dated December 10, 2021, and read during plenary yesterday by Senate President Ahmad Lawan.