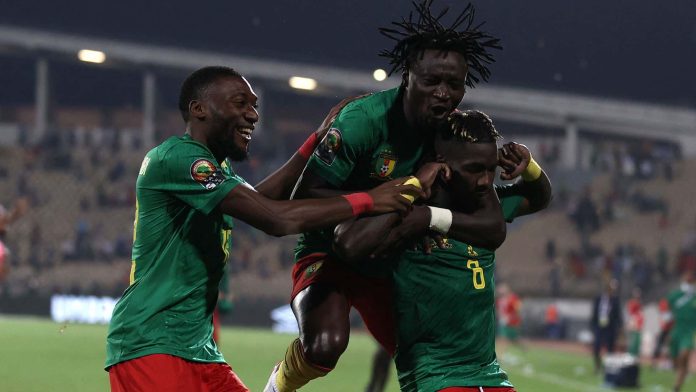 Vincent Aboubakar scored twice as Cameroon fought back from 3-0 down against Burkina Faso to level matters before winning the third-place play-off 5-3 on penalties.

Both teams went into the Ahmadou Ahidjo Stadium in Yaounde hoping to make amends for their semi-final disappointments.

While the Stallions fumbled 3-1 to Senegal, the Indomitable Lions lost 3-1 to Egypt on penalties after the scores stood at 0-0 after extra time.

Despite a bright start by the hosts, it was the West Africans who took a shock lead in the 24th minute through Steeve Yago, whose half-volley from Issa Kabore’s well-taken cross beat goalkeeper Andre Onana.

That goal woke the five-time African champions from their slumber, but while trying to restore parity, it was Burkina Faso who added the second two minutes before the half-time break.

Kabore’s harmless cross was fumbled into the net by Onana. Cameroon players protested claiming the ball had gone out of play. Nonetheless, the goal stood after referee Redouane Jiyed consulted VAR.

Knowing that they would have an arduous task to level matters, Aboubakar was introduced for Samuel Gouet early in the second half.

Even at that, it was more worries for Toni Conceicao’s Lions as they leaked the third goal four minutes after the restart courtesy of Djibril Ouattara – who headed Bertrand Traore’s glancing cross into the net.

While Burkina Faso fans were already jubilant thanks to their three-goal advantage, Cameroon did the unthinkable.

First, they pulled one goal back through Stephane Bahoken in the 71st minute. The 29-year-old Angers striker benefitted from a goalmouth scramble to fire past goalkeeper Farid Ouedraogo from close range.

With just five minutes left on the clock, Aboubakar made it two for the Afcon hosts heading home a corner kick from Nicolas Ngamaleu.

The comeback was complete in the closing seconds of the match as the former FC Porto star capitalised on a blunder from Ouedraogo to tap into the net – a goal that sent the home fans into wild jubilation.

Next up was the shootout to determine the winner. There, Onana went from villain to hero by stopping Ibrahim Toure’s kick, thus denying Kamou Malo’s men a chance of returning home with the bronze medal.

Chelsea vs Villarreal: We are playing for title – Unai Emery...