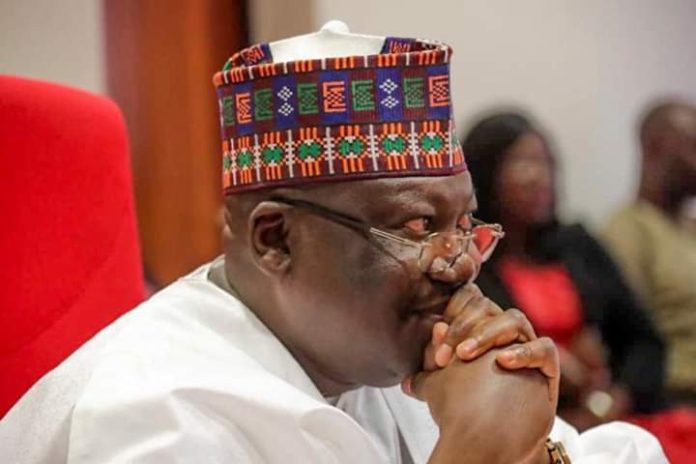 The Senate President, Ahmad Lawan said on Thursday that the main opponent, Peoples Democratic Party, PDP, should rather go around Nigeria between now and 2023 polls to ask for forgiveness over past failures and should not bother asking Nigerians for votes.

Lawan said the 16 years of PDP in power created so much damage that would only require them to seek forgiveness from the people and not their votes.

Lawan said 2022 is a year of consolidation for APC administration in the light of the legion of ongoing projects which would be commissioned during the year.

He spoke at Agasa in Okene Local Government Area of Kogi State at the commissioning of the Constituency projects of Senator Yakubu Oseni who is representing Kogi Central Senatorial District at the Senate.

Lawan said: “The Year 2022 is a year of consolidation for APC administration across Nigeria.

“Since the arrival of this administration in 2015, so many projects are ongoing across the country including the second Niger bridge which by the Grace of God will be completed this year and will be commissioned by Mr President.

“There are so many road projects that are ongoing. So many infrastructural development projects…This year, by the Grace of God, we will complete these projects and President Muhammadu Buhari will go round the country either in person or virtually or in a representative capacity to commission these projects.

“So the best will be coming this year from the APC. Nobody should deceive anybody. When some people had 16 years, uninterrupted, they didn’t deliver. We have been around only for seven years, that is even less than half, and we have delivered more than they did in 16 years.

“I wouldn’t like to be too partisan but I know that some people have failed Nigeria in 16 years of their stay in charge of the government.

“If anything, what they need to do between now and when elections will hold is to go to every community in Nigeria and ask for forgiveness for their failure. Not to seek votes.

“To ask for votes is to show a complete lack of respect for Nigerians. The damage that was done in 16 years is still very much with us. We are still trying to work hard to ensure that we remedy the mess left for us to deal with.

“This administration is doing everything possible to secure lives and property of Nigeria. It has not been an easy task…The security situation of this country will be far better by the Grace of God(before 2023). Our infrastructural development will have been far better and another APC administration will come and build on where Mr President would have left.

“This is without prejudice to the election because what we have done in the National Assembly is to produce a very important Electoral Act, the amendment to 2010 Electoral Act which Mr President patriotically signed into law and that is one law that will guide the general elections in 2023.

“So we are looking forward to a very improved, transparent elections in 2023. And of course APC will come out top.”

The Senate President showered praises on Senator Oseni who he said “distinguished himself as a team player” and for being “able to ensure that the activities of the Ninth Senate never stopped as far as he was concerned and involved.”

One of Senator Oseni’s Constituency projects commissioned on Thursday by the Senate President was a 600 capacity JAMB CBT Centre at Agasa, the country home of the Kogi State Governor, Yahaya Bello.

Lawan seized the occasion to underscore the importance of the Constituency projects.

“When we fight for constituency projects to be funded in the National Assembly, we do so because of what we witness today.

“We go out to the remotest part of our community. We look for projects that will have very direct impact on the lives of the people that we represent. And that is important because, in effect, is to complement the major projects that we fund in the Federal budget.