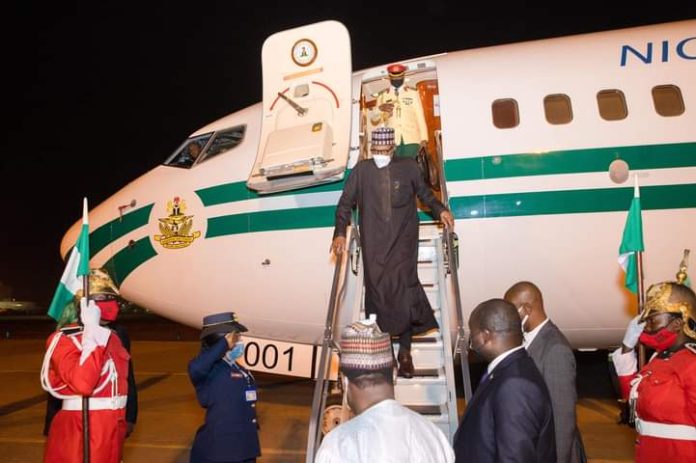 Just a week to the March 26 national convention of the All Progressives Congress, APC, President Muhammadu Buhari on Friday evening returned to Abuja from London where he had gone for his routine medical checks.

The President, whose aircraft touched down at the Presidential Wing of the Nnamdi Azikiwe International Airport, Abuja, at about 7:10pm, was received by his Chief of Staff, Professor Ibrahim Gambari, the Minister for the Federal Capital Territory (FCT), Mallam Muhammed Musa Bello,and other senior officials.

The President returned to the country two days earlier than scheduled.

Recall that before President Buhari traveled to London, Chief Adesina in a statement on the trip said that he (Buhari) would stay a maximum of two weeks.

Speaking on the import of Buhari’s return, the Special Adviser to the President on Media and Publicity, Chief Femi Adesina, said the President’s return would be most significant in providing direction to the ruling party, the All Progressives Congress (APC), as it prepares for its National Convention.

Asked what Nigerians should expect from the President as he returns, Adesina said “he will continue what he’s doing. 14 more months and the administration breasts the tape. He’s going to give in his very best so that he lands safe and sound. And now particularly that APC has, or has had issues, and it has it’s convention ahead of him, the President has come at a good time to bring back better cohesion into the party and get the party to hold a successful convention”.

He noted that the President returned to the country two days short of the earlier planned two weeks is an indication that he is in top form, health wise and ready to continue with his duties.

“All is well, that ends well. He said he was going and he will be away for 14 days, today is the 12th day. So the fact that he came about 48 hours earlier shows that all is well with him physically, spiritually, and we’re glad to have him back” he said.

Meanwhile, some of the other top officials that received the President on arrival included Minister of Water Resources Engr Sulieman Adamu; DIG of Police Hassan Sanusi; Director-General of the Department of State Service (DSS), Mallam Yusuf Magaji Bichi, among others.

Buhari Can Order The Nigeria Army To Produce His Certificate If...