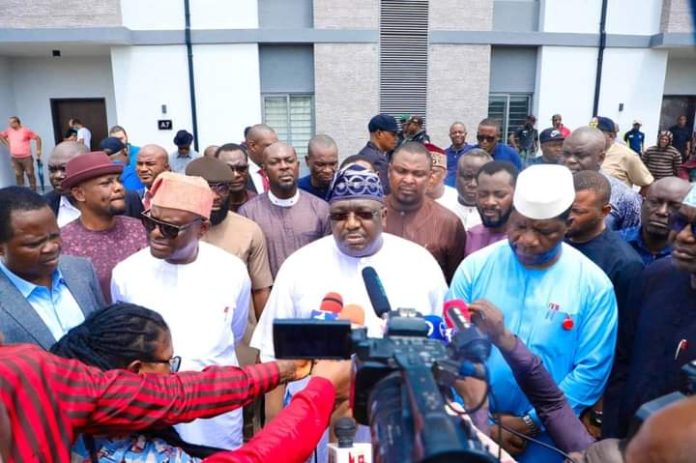 The chairman, Senate Committee on Judiciary, Human Rights and Legal Matters, Senator Michael Opeyemi Bamidele has advocated that the Dr. Nabo Graham Douglas Port Harcourt Campus of the Nigerian Law School should serve as the centre for the promotion of continuous legal education in the country.

Senator Bamidele said the advocacy is part of the Senate committee’s advice to the Council of Legal Education and the Nigerian Law School because the Port Harcourt Law campus meets the global best standard required of such centre.

Members of the Senate committee were in Port Harcourt, capital of Rivers State, on Tuesday on an oversight visit of the campus and were conducted on an inspection tour by Governor Nyesom Ezenwo Wike. They also inspected the brand-new exquisite Rivers State House of Assembly residential quarters that is near completion.

Senator Bamidele said they are amazed at the quality of facilities that the Rivers State governor has provided for the training of law graduates and prepare them for the challenges of the profession.

According to him, this is one of the happiest oversight visit that they have paid in the life of their own leadership of the Senate Committee.

Senator Bamidele pointed out that Governor Wike has set global best standard and that it is not only law students that would use the facility, but practicing lawyers alike who could undertake their CLA programme on the campus.

He stated that the eventual realisation of the campus underscores the point that when leaders are able to work together across party line and beyond political, ethnic, religious divide, they can really take Nigeria to that next desirable level.

“Governor Wike, a PDP leader, a PDP governor from the Southern part of the country made an offer. It was tabled by the Attorney General of the federation, an APC man to president Buhari of APC and without wasting time, it was approved. And today, we have seen the implication of that.”

Commenting on the 32 units of four-bedroom duplexes at the legislators quarters, Senator Bamidele said Governor Wike has also blazed a trail in the provision of unbeatable housing facility for lawmakers.

“We have been around the country by the grace of God. We have interacted with our colleague parliamentarians at the State level in different States’ Houses of Assembly. We know where they live. We know how they live and we know that they are no less committed.

“Coming here to see what we are seeing today, again, I want to say it’s a confirmation of the fact that you have as governor, a trailblazer and someone who will continue to excel in setting a global best practice standard.”

Senate Minority Leader, Senator Philip Aduda, commended Governor Wike for his laudable projects and stressed that this necessitated the clamour for him to move to the centre to replicate some of extraordinary achievements.

The Speaker of Rivers State House of Assembly, Rt. Hon. Ikuinyi-Owaji Ibani, said Governor Wike’s decision to construct a new campus of the Nigerian Law School in Port Harcourt is a sheer demonstration of his patriotism and commitment to the nation.

Speaking on the legislative quarters, the Speaker said the conducive residential environment created by the governor for the State lawmakers will enhance their productivity.

On his part, former President of the Nigerian Bar Association, Chief Onueze. C. J. Okocha, SAN, said the completion of the Port Harcourt campus of the Nigerian Law School is another promise fulfilled by Governor Wike.

“We thank you distinguished Senator (Bamidele) and I’m glad that you have come and seen with your distinguished colleagues that Governor Wike was not making an empty promise when he said he will contribute to the development of law education in this country, a campus for the Nigerian Law School.

“As I said to you, he has done many more in the legal field, for the Bar Association, for the judiciary, he even built and refurbished Federal Courts to the glory of all of us who are in the legal profession.”