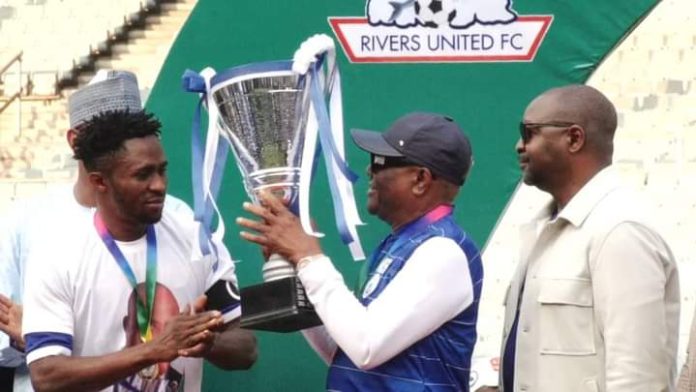 The governor made the presentation after the match day 38 clash between Rivers United Football Club and Gombe United at the Adokiye Amiesimaka Stadium on Sunday.

It will be recalled that Rivers United were confirmed as winners of the 2021/22 Nigeria Professional Football League (NPFL) on June 26 following Plateau United’s defeat by Akwa United.

Governor Wike had before the presentation of the trophy charged Rivers United, which will be representing the country at the Confederation of African Football (CAF) Champions League next season to work assiduously for the continental prize.

The governor assured the Rivers United team and its coaching staff of the resolve of the State government to render every required support that will make the club excel during the Confederation of African Football (CAF) Champions League next season.

Governor Wike disclosed that the State government will ensure that Rivers United players and its management are made comfortable in Port Harcourt.

He announced the reward of One Million Naira for each member of the team for defeating Gombe United.

APC Belongs To Us, We Are Going Nowhere, Obaseki Reaffirms