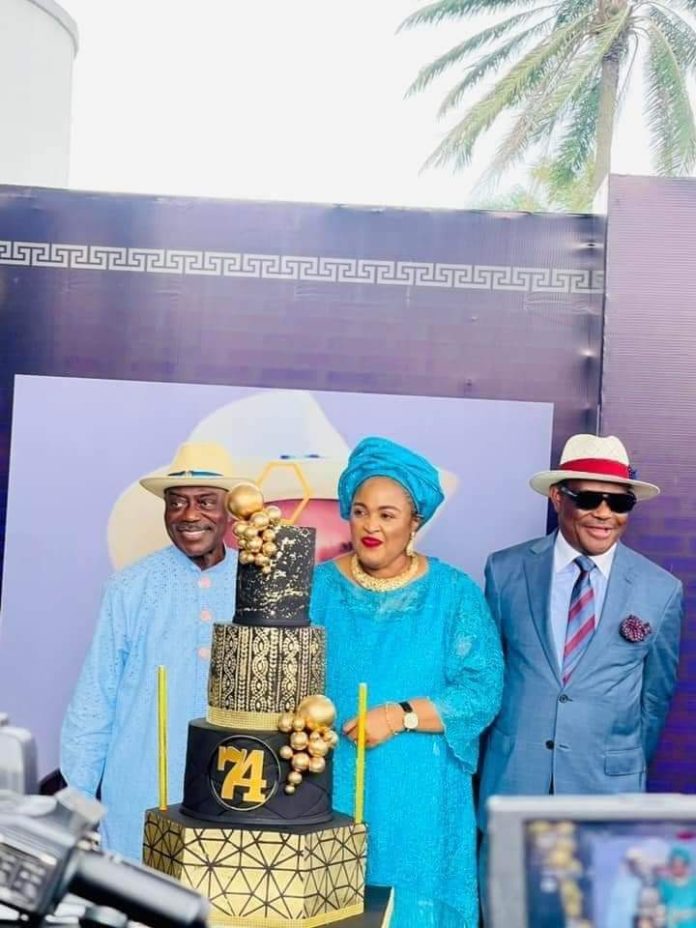 Rivers State governor, Nyesom Ezenwo Wike has accused some elders of ganging up against him because they did not scale though the primary to be the governorship candidate of the Peoples Democratic Party, PDP in the State.

The governor explained that some of them, on his 2021 birthday, who indicated interest to fly the ticket, but failed at their bid to clenching it are now in Abuja plotting against him.

Governor Wike spoke on Monday during the 74th birthday reception organised to honour the former governor of Rivers State, Dr. Peter Odili at the private residence built and donated to him by the State government in Old Government Residential Area, Port Harcourt.

Governor Wike said those elders came to him on their own accord and showed a commitment that they would stay to see through what they came to convince him about.

“On my last birthday, 12 midnight, some of our elders called me that they want to see me. They came to me and said they came to wish me happy birthday.

“Then, they presented me a letter that I should run for president. All of them including Dr. Abiye (Sekibo) signed the document.

“I say okay, you people too should go and give me someone who will be governor after me. They all sat there, looking left and right.

“I asked them, those of you who are interested to be governor should raise your hands. Everybody raised his hand. One person didn’t raise his hand, Senator Bari Mpigi. I asked why he was not interested, he replied, sir, let me hold what God has given me. I don’t want to lose the two.”

Governor Wike noted the elders also signed to a document that they would abide by whatever becomes the outcome of the governorship primary.

But Governor Wike expressed the regrets that since they were not successful, they have turned around now to allege that he was pursuing a third term bid.

“Some persons don’t know the history. They go and tell all kinds of story. But the truth is this, all of them (elders) signed the document prepared by O.C.J. Okocha that whoever I will bring, they will abide to it.

“But now, they went to Abuja, that I must not be vice president. I also read, yesterday when I was in Paris, one of them saying that I told him that if they do to me what they did to Dr. Odili that I will collapse the system.

“I am not an ungrateful person And I will never be ungrateful in my life. What’s important is that I have done well as a governor. I am happy and I am leaving office a happy man.”

The Rivers State governor recalled that when Dr. Peter Odili was to run for the office of the president, he had a large crowd following, happily.

But noted that when the issue of governorship of Rivers State was to be decided and he did not give those who wanted it, they all left him, ran to Abuja to thwart his presidential ambition.

Governor Wike, however, said he has been holding on to the advise of Dr. Odili, hence he was not surprised at the turn of events and the outcome of the PDP presidential primary.

He described Dr. Peter Odili a true leader of men who groomed many, and supported a lot of persons to political lamplight particularly in Rivers State and across the country.

“There was a time every political class abandoned Dr. Odili. This is a man who gave us everything. Some people called him Mr. Donatus. There was no abuse he did not get. Everybody he tried to help their families, at the end of the day, all betrayed him.

“For us, we have used him as a school and we thank him for making himself available for us to use him to learn so that we won’t be shocked of whatever that is going to happened.”

Governor Wike expressed delight for the opportunity to have known Dr. Odili and being able to celebrate him. He pointed to the several support and the gains from the political tutelage under Dr. Odili that had made him accomplish his political successes.

He reiterated that Odili’s benevolence made it possible for an Ikwerre sons to emerge governors of Rivers State.

In his response, Dr. Peter Odili said, himself and his wife, Hon. Justice Mary Odili (retired) were overwhelmed by the birthday gift courtesy of the State government.

Odili explained that during his tenure as governor, governor Wike was the best performing council chairman in the State.

In his goodwill message, governor Samuel Ortom of Benue State harped on the need for all Nigerians to work together to enthrone fairness, justice and equity in all facet of society, which Odili has always stood for

Also speaking, Abia State Governor, Dr. Okezie Ikpeazu noted that Dr. Odili is a great leader who had impacted on many lives across the country.

In his homely at the thanksgiving mass, Monsignor Pius Kii said Nigeria missed the opportunity of having Dr. Peter Odili as their president because he would have used his farsighted ability, courage and adaptive capacities to solve Nigeria’s many problems.

Senator Adamu exposes those against Buhari in Senate