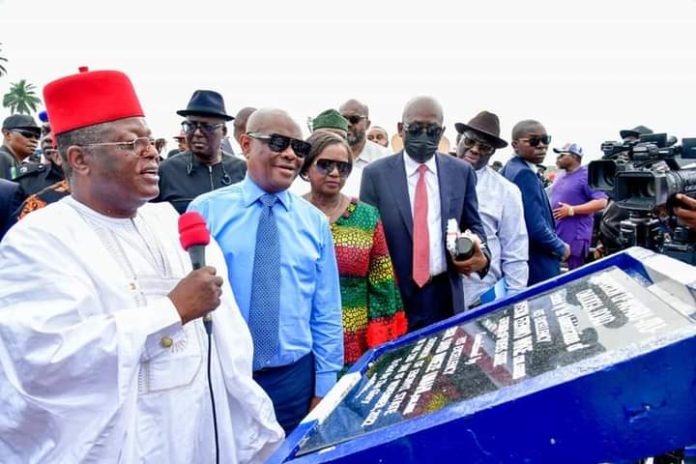 Rivers State governor, Nyesom Ezenwo Wike has accused those who demanded from former president Goodluck Jonathan to relinquish his presidential ticket when he won to run for a second term in 2015 for the protracted crisis rocking the Peoples Democratic Party, PDP.

Governor Wike made the explanation at the inauguration of Akpabu-Itu-Omudiogha- Egbeda Road in Ishimbam land of Emohua Local Government Area in Rivers State. Governor of Ebonyi State, Engr. David Nweze Umahi performed the inauguration on Tuesday.

The governor said president Jonathan went to those chieftains of the PDP and pleaded with them to return, and work to ensure that the party won the 2015 election, but they refused unless he relinquishes the ticket to them. According to him, Jonathan specifically met with the current PDP presidential candidate, Alhaji Atiku Abubakar in Dorchester hotel in London and appealed to him to return to the party.

“In Dorchester hotel (London), he (Jonathan) went to plead with this our presidential candidate today, Atiku Abubakar, to say please my brother come back to the party and support me. You know the condition they gave to Jonathan, he should relinquish his ticket not to run as president of Nigeria. That was a sitting president and presidential candidate of a ruling party.”

Governor Wike wondered why people are now calling for his head because he and other governors that made up the Integrity Group are demanding that PDP national chairman, Dr. Iyorchia Ayu relinquish his position.

Governor Wike explained that his previous face-off with Governor Umahi was not personal, but to protect the PDP whose mandate he took away to another party.

The Rivers State governor said he pulled out of that legal battle against governor Umahi because despite the fact that he hired the PDP lawyers, the national leadership of the party in Abuja did not consult with him when they decided those to likely replace the Ebonyi State governor.

“Let me publicly say, most people thought that you and I are quarrelling, we are not in speaking terms. My dear people, I want to say this, David Umahi has no problem with me personally. If there is one governor that David Nwaeze Umahi is very close to it’s me. I was defending our party when he took our mandate and ran away. And I said my brother bring back our mandate.”

He explained that he could not have continued to fight for a party that does not appreciate what he was doing for it.

“But you see in fighting for the party, there was nothing personal, even though the party you are fighting for turned around not to appreciate what you are doing. When you see Wike is fighting, there is nothing personal about it, but it is for the interest of the party. And I have said all those fights is no longer necessary. I won’t continue to fight and people will not appreciate.”

Governor Wike explained that when politics is seen to be about the people, political leaders will protect the interest of their people and improve their lot.

The governor maintained that those who see politics as avenue to make enemies are on a wrong path because it will prevent them from attracting democratic dividend to their people.

Governor Wike said though it is a matter of choice to chose which party to belong, the decision to pitch tent where the interest of the people you represent can be protected is paramount to consider.

Commenting on the road project, Governor Wike noted that the road has connected three communities of one political ward and ease movement directly, which was not possible before now.

Performing the inauguration, Governor David Nweze Umahi of Ebonyi State described governor Wike as a true nationalist who has ceaselessly built bridges across the country to foster unity.

Governor Umahi also noted that his Rivers State counterpart fights for others delightfully and unreservedly supports others to succeed.

According to governor Umahi, he left the PDP because he foresaw betrayal in the party, which has manifested and sued that no matter, the unity of the country should be pursued.

The Ebonyi State described as treacherous the decision of some governors of southern Nigeria extraction to jettison the resolution they made that the next Nigerian president after President Muhammadu Buhari should be from the south.

The Ebonyi State governor commended governor Wike for working for his people, delivering infrastructure that is second to none and securing Rivers State for the PDP

In his presentation, Rivers State Commissioner for Works, Dr Dakorinima George-Kelly Alabo said the road that was initially designed to connect three communities was extended to connect four communities, which has stretched it to the Elele-Omoku road.

The chairman of Emohua Local Government Area, Dr Chidi Lloyd , who said he fiercely opposed governor Wike’s ambition in 2015, commended him for his magnanimity in constructing the road for his people.

“I was in the Rivers State House of Assembly for 12 years, I could not do it. I will try to redeem all I have done to you.”