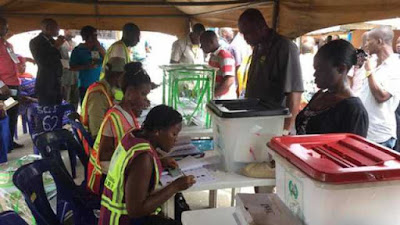 The Independent National Electoral Commission has been dragged before Hon. Justice J. K. Omotosho of the Federal High Court 5, Port Harcourt by a Human Right Lawyer Barr Godspower Egbule over the Continues Delay in Concluding rerun for Etche/Omuma Federal Constituency in Rivers State.

Barrister Godspower is seeking an order of Court Compelling the Independent National Electoral Commission to announce a Date for the Conclusion of the Rerun National Assembly For Etche/Omuma Federal Constituency and the Etche Constituency 2 State Assembly rerun within 14days  of determining his suit.

In a chat with PUO REPORTS,Barr Egbule described as unfortunate,the continues denial of Representatives for Etche and Omumu People even as 2019 draws Closer.

“While the rest of the Country is gearing up for the 2019 general elections, it is sad that the people of Etche/Omuma Federal Constituency and Etche Constituency 2 don’t have a representation at the National Assembly and Rivers State House of Assembly, respectively”.

“I have instituted an action against the Independent National Electoral Commission at the Federal High Court sitting in  Port Harcourt. In the suit filed by me,  Barr. Godspower Egbule, I am praying the court to oder INEC to conclude the legislative rerun elections for Etche/Omuma Federal Constituency and Etche Constituency 2 in the Rivers State House of Assembly”.

It will be recalled that elections in the Federal and State Constituencies in Etche LGA were postponed indefinitely by INEC citing electoral violence that characterised the December 10, 2016 rerun elections in the constituencies,however INEC is yet to schedule a new date for the elections.

While granting the prayer in the ex-parte application, the presiding Judge granted the Plaintiffs leave to serve INEC & Prof. Mahmoud Yakubu at the INEC office in Abuja.

The matter was adjourned to 21st day of March 2017 for hearing.

Below are the Court Papers 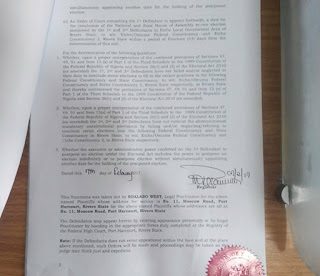 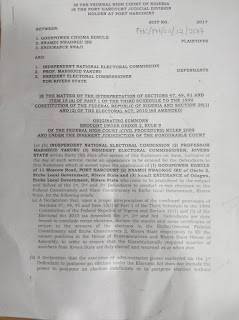 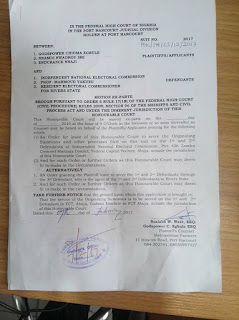