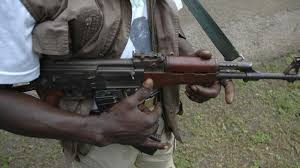 Some gunmen in the early hours of Friday, attacked a police station at Eika community in Okehi Local Government Area of Kogi, killing two policemen and a detainee.

The News Agency of Nigeria ( NAN) gathered that the bandits invaded the police station at about 1 am and immediately opened fire on policemen on duty, killing them, alongside a detainee

The heavily armed hoodlums, said to be about 10, later set the station ablaze and proceeded to the house of  Mr Sadiq Obomi, Chairman, Eika Community Development Association, and killed him.

However, a resident of Eika community who is also a member of a local vigilante group, told NAN that the gunmen came in two vehicles and started shooting into the air as they made their way to the police station.

He said that the gunmen later escaped after the operation, which he said, lasted almost two hours.

Security men have been deployed to the community to maintain peace.