Home Uncategorized The judge ordered the return of the case file to the Chief...
Spread the post 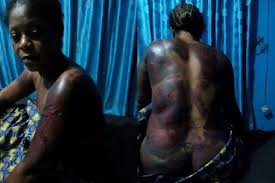 A woman, identified as Ruth Orji, is battling with injuries inflicted on her body by some soldiers, including one Major Ibongha, attached to the 174 Battalion, Ikorodu, Lagos State.

Around 5pm on Wednesday when she spoke to PUNCH Metro on the telephone, she explained that she was being transferred from a military hospital in the area to another facility in Ikeja for intensive care.
This is just as a rights group, Joint Legal Action Aids, filed a lawsuit against the Nigerian Army at the Federal High Court in Lagos, demanding N250m compensation for the victim.
PUNCH Metro learnt that the woman and her younger brother were returning from a birthday party in a hotel in Odogunyan, Ikorodu, on Sunday at about 8.30pm when the soldiers stormed the area and started beating up people.
She said one of the soldiers slapped her brother and she protested, adding that the men descended on her, seized her phone and took her to their barracks.
“I don’t really have strength to talk much now. I am being taken to another hospital in Ikeja. The incident happened on Sunday. We went for a birthday party in a hotel in Ikorodu. As we were coming out of the hotel around 8.30pm, some soldiers arrived in a vehicle and started beating up people, including my brother. I begged them.
“They bundled me inside their vehicle and took me to their barracks, where they beat me up,” she said.
Orji stated that she was still in pains and urged our correspondent to call back.
The General Counsel for the JLAA, Kingsley Ughe, said the body had petitioned the Chief of Army Staff, Lt. Gen. Tukur Buratai, and copied the commander of relevant military formations on the assault.
“We are not waiting. We have today (Wednesday) filed a legal process at the Federal High Court against the Nigerian Army and her assailants to assert her rights and demand N250m compensation.
“We are using her case and that of Ebere Ohakwe (an actress who was brutalised by soldiers in Port Harcourt, Rivers State in February) to send a message to lawless elements within the military that the days of impunity and degradation of the Nigerian people are over.
“We have a binding precedent in the case of Rosemary Okeke, who suffered a similar fate, and got justice through the court system. We are very confident of the unassailable nature of the cases and the evidence therein,” Ughe said.
Since the disturbing picture of the assault went viral on Tuesday, Nigerians have been condemning the attack on Orji, calling on the Chief of Army Staff to mete out stiff punishments to the culprits and caution his men.
A Facebook user, Jewel Infinity, wrote, “I am really feeling her pains right now. Please, she needs justice at all cost and that was why I took her case to JLAA. It happened to me, to Chijioke, the crippled man. Who knows who is next?”
Another commentator, Imoh Cyril, urged the Nigerian Army to restore sanity to the force.
He wrote, “The framework of the military on the treatment of civilians, especially women, needs to be seriously revisited. The way people are being treated like animals by these set of armed men is sickening. A lot of these issues are caused by illiteracy of a lot of the infant soldiers, but that is no excuse because if the head is right, the body will be clean.”
Doris Ify Eze Udechukwu wrote on Facebook, “Ah! Again, this is quite unbecoming. Shame on the military.”
However, the Acting Deputy Director, Army Public Relations, 81 Division, Lt. Col. Olaolu Daudu, said the soldiers that perpetrated the dastardly act had been detained and were under investigation.
Daudu said the outcome of the investigation and punitive measures recommended for the erring soldiers would be communicated to the public.
He said, “I have also seen the photo online. We are aware of the incident. Investigation is ongoing and the woman is receiving treatment. We want to ascertain the circumstances surrounding the incident and the level of involvement of the soldiers. If they are found wanting, they will not go unpunished.
“Inasmuch as we cannot isolate some unwanted elements completely from the system, the Nigerian Army has zero tolerance for indiscipline. The case will not be swept under the carpet. The soldiers have already been detained for investigation. As soon as the investigation is concluded, whatever punitive action taken against them will be made known.”
Source: punch