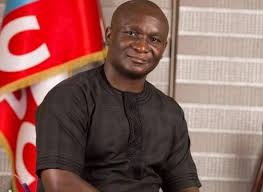 A chieftain of the All Progressives Congress (APC) in Bayelsa State and ex-Chief of Staff to former Governor Timipre Sylva, Chief Samuel Ogboku has tackled his fellow party man, Perekeme Richard Kpodo over his recent attack on some Ogbia sons, describing it as an affront on the peace-loving people of Ogbia land, by a mischief-maker.Chief Ogboku who is also the deputy Paramount Ruler of Ayakoro Community accused Kpodo of plotting to pitch one part of Ijaw against the other.

It would be recalled that Kpodo had in a recent newspaper article accused former President Goodluck Jonathan of favouring mainly his kinsmen from the Ogbia community through economic empowerment.Describing the claim as a blackmail and full of lies, Ogboku further dismissed it as a divisive intention meant to pitch Ogbia people against their brothers in the entire Ijaw nation.

On why he opted to take on a fellow APC Chieftain, Ogboku said: “I wish to state that I have nothing personal against the author even if some people would want me to align with his submissions just because the people being attacked are members of the Peoples Democratic Party. On this matter, politics should not be an excuse to peddle lies and baseless allegations against hardworking Ogbia entrepreneurs.

As an Ogbia Chief, I cannot hide under partisanship to allow unscrupulous characters to needlessly insult our people and heritage. In a democracy, the author has the right to talk about any subjector criticise and express his views. What is not acceptable is deliberately portraying Ogbia in bad light.”

He said further: “Perekeme Richard Kpodo, in the said publication mischievously sought to portray the Ogbia people as the only beneficiaries of the Jonathan’s administration in the Niger Delta and supporting his warped argument with the few names of Ogbia sons currently going through an ordeal in the hands of anti-corruption agents.

“Firstly, I may not be a friend to those he mentioned, but I can’t remember any Court of law finding any of these Ogbia sons guilty since the law says an accused is innocent untill he is found guilty. So, for now, nobody has the right to pass judgement on them. Moreso, some of the persons the author mentioned are not under any kind of investigation, so why blackmail successful and purpose-oriented
businessmen.

Dr. Eruani Azibapu, who is not under any kind of investigation is a successful businessman from Ogbia, and we are thankful to God to have such a person in our community.“The author emphasized on the Refinery under construction, by Dr. Eruani. It should be made clear to the author in case he doesn’t know, that Dr. Eruani’s firm obtained the licence for a Private Modular Refinery under the current Government of President Mohammed Buhari.

This present administration further granted a 500MW power generation plant to Dr. Eruani’s firm, based on its proven capacity and credibility. So, as Ijaw people and Nigerians we are opportune to benefit from the President Buhari Administration just as other determined businessmen across the country benefitted from past administrations, including Alhaji Aliko Dangote who also got a licence for a refinery under the friendly policies of the Goodluck Jonathan administration. It is our belief that the mischief and blackmail of Kpodo are ill-conceived and should not be taken seriously.

“Secondly, it should be stressed that the anti-corruption fight of the present administration is not restricted to a particular zone and quite a number of personalities across the Nation are under investigation, and not just Ogbia people contrary to the impression being created by Kpodo. Even within the Ijaw ethnic nationality, a number of individuals are facing trials while some have been declared
wanted. Amazingly, some of these persons who are Kpodo’s kinsmen are facing weightier allegations than the salacious lies being circulated about the Ogbia people. So, the question is: what could be Kpodo’s intent in singling out Ogbia people for ridicule if his write up is not an affront on the community?

“Ordinarily, the publication would have been ignored especially coming from a character like Kpodo. However, doing that would be a cheap way of accepting the spurious claims and attack on the collective psyche of the Ogbia people. It is unacceptable for anyone to portray the Ogbia people as criminals and failures. In Kpodo’s jaundiced assessment, a man celebrated worldwide for his stewardship in government could be a failure. But we all know the truth which cannot be diminished by the rant of Kpodo. President Jonathan’s achievements are footprints that remain indelible. Need we remind Kpodo and those beating the shameless drum for him to dance to that President Jonathan was a President to all Nigerians and not a president of Ogbia or Bayelsa State. He is a symbol of pride to the Ijaw people and the entire Nation. Could Kpodo have forgotten this early that President Jonathan

Loneliness as a new disease