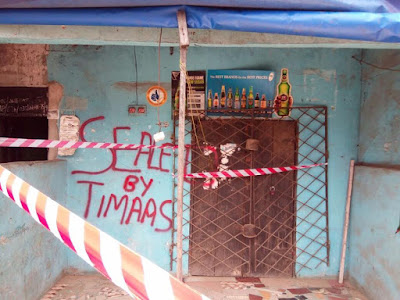 A beer parlor, located at No 59 Ikot Ekpene road Aba, allegedly owned by one Mrs Florence Agwu, a.k.a Lady P, has been sealed by the Aba team of the Traffic and Indiscipline Management Agency of Abia State (TIMAAS).

Mrs Florence Agwu constructed a ‘batcher’ on the drainage way, where her customers defecate after gulping bottles of alcoholic beverages.
While sealing the beer parlor, the Deputy General Manager of TIMAAS in charge of Aba operations, Engr. Bright Chinedu Ikeokwu, recalled that he personally cautioned the woman three days ago and warned her never to continue with her inhuman act after he had removed the batcher. But to his surprise, she replaced the batcher and boasted to the hearing of those around that nobody can stop her from doing her beer parlor business.
Mr Ikeokwu, in an interview, warned that henceforth TIMAAS will ensure that every act of indiscipline at Aba will be thoroughly dealt with according to the law.
He stated that Mrs Florence Agwu, a.k.a Lady P, will be charged to court immediately so that it will serve as a deterrent to others.
The TIMASS boss called on Aba residents to support his agency to rid the city of pervasive indiscipline that has slowed down rapid development of the SME capital of Nigeria.