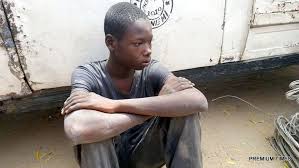 A 17-year-old Boko Haram suspect said he was forced to kill 13 people in Chikingudu forest in Kalabalge Local Government Area of Borno when he was held captive for three years by the insurgents.

The suspect was arrested by men of the Borno Command of the Nigeria Security and Civil Defence Corp after he was sent on a mission by his Commander to spy on Maiduguri.
He said in Maiduguri that he was sent by the terrorists to assess the situation in Baga Road, Monday market and Customs market in Maiduguri, and report back.
He said, “I was kidnapped in Marte by the insurgents when they stormed the town in 2013 and they took us away to Chikungudu forest in Kalabalge local government area.
“I was held captive for three years at Chikungudu. During those three years, I killed 13 people in separate locations.
“First was at Chikungudu where we were held hostage by the Boko Haram. They forced us to kill people, especially when they returned from a mission.
“They said they were testing us and, therefore brought some people and asked me to kill five people.
“I initially declined but they threatened to kill me, so, I had no option but to kill them.”
He said the insurgents later came with three other people and forced him to kill them.
He said, “The second time was at a village called Burssari, they also brought five people and ask me to kill them, which I did.
“I spent three years with the insurgents in Chikunguda and Kalabalge. Life for us was indeed terrible. We were trained to dismantle and repair AK 47 rifles.”
He also said that more than 500 children of his age and others who were senior to him, were initiated as child soldiers in the Chukungudu forest by the insurgents.
The Commandant of the Nigeria Security and Civil Defence Corps in the state, Ibrahim Abdullahi, said the suspect was arrested near the Bakassi IDPs camp, Maiduguri, by men of the command.
Abdullahi said the suspect’s parents were identified as IDPs taking refuge at the camp.
“The suspect will be handed over to the military for further investigation and profiling,” he said.
Source:punch