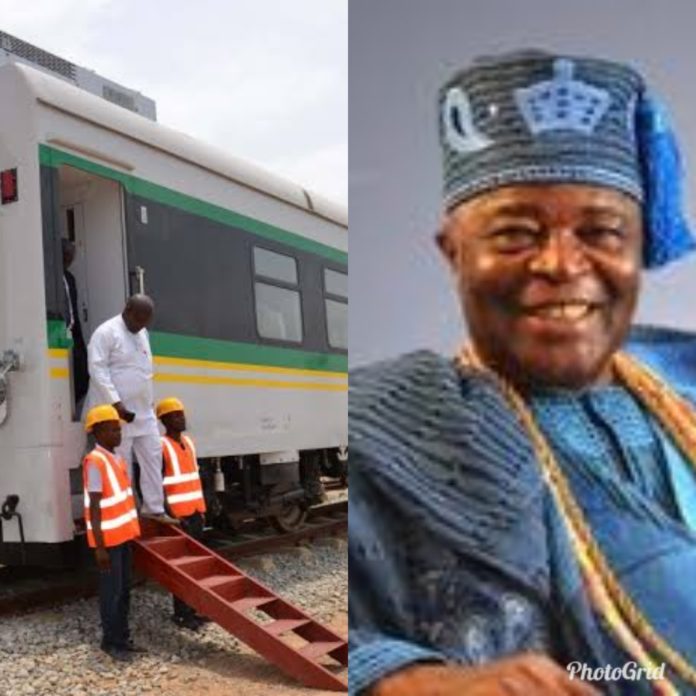 Spread the post
Alake of Egbaland Makes History Again; Makes Maiden Official Journey in the New Lagos/Ibadan Standard Gauge Railway Lines
The Alake of Egbaland has on Friday 8th February make history for the second time in the history of railway transportation system in Nigeria.
Oba Adedotun Aremu Gbadebo, the Alake of Egbaland, Test-run the new Lagos/Ibadan Standard Gauge Railway Line from Iju in Lagos to Abeokuta.
Oba Gbadebo travelled on the same train with the Vice President, Prof. Yemi Osinbajo, the Ogun State Governor, Senator Ibikunle Amosun, the Honorable Minister of Transport, Chief Rotimi Amaechi and the Eleko of Eko, Oba Rilwan Akinolu, among others.
Oba Adedotun made the history like his great grandfather, Oba Oshokalu Gbadebo, who in 1906 also traveled by the First railway from the same destination in Nigeria.
Recalled that Egba people made Great sacrifice by working under forced labour to clear road for the modern first railway system in Nigeria.
The Lagos Railway Residence Engineer, Engineer Shamsideen Balogun, confirmed that the Alake and Paramount Ruler of Egbaland and other Dignitaries departed Lagos from Iju to Abeokuta by 10:00am on Friday, 8th February, 2019 and arrive Abeokuta after about an hour.
Engineer Balogun explained further that the train travelled at a lower speed than normal so that the VIP travelers could enjoy the scenetic vegetation on their way to Abeokuta.
Adding that the journey terminated at point 82, near Laderin Housing Estate, Abeokuta at exactly 11am, Friday February 8, 2019.
According to the Minister Transportation, Chief Rotimi Amaechi, the Lagos- Ibadan Standard gauge Railway Lines is a 1.5 billion-dollar project railway that will connect the cities of Ibadan and Lagos.
The Minister also said that commuters from and to Abeokuta would enjoy free rides for the next few weeks when the train would be fully operational.
The Alake expressed happiness that Egbaland was witnessing standard gauge in rail system, while at the same time commending the Egba farmers, Hunter and other people that were compelled into doing the first labour in clearing the root for the narrow gauge railway system.
He prayed for the memories of the Egba who died during the colonial force.

Defection: Dogara Not Our Member – APC

Sampson Uchechukwu Ogah: An Entrepreneurial CZAR In A Rescue Mission For...