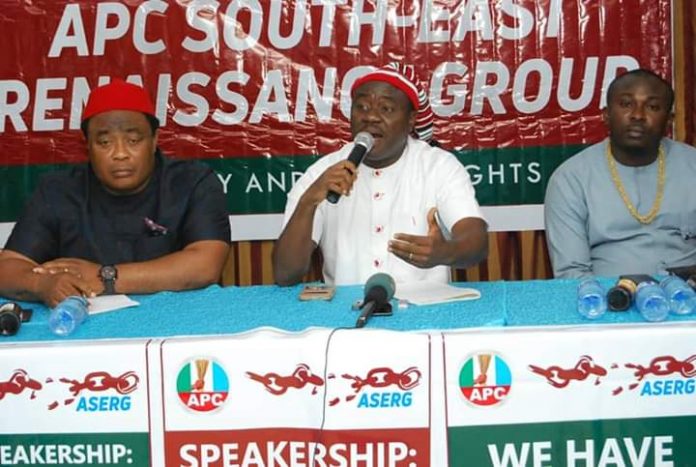 ABUJA – A pressure group within the ruling All Progressives Congress APC, the South-East Renaissance, has accused the Southwest bloc of the party of avarice saying having gotten the position of the vice president, it would be inconsiderate to again seek to produce the Speaker of the House of Representatives.The group said since the party leadership has zoned the senate presidency to the Northeast, the more plausible thing to do is to allow the Southeast produce the Speaker.

From established political norms and antecedents, in the spirit of natural justice and equity, what we thought our party would have naturally bequeathed us the Senate Presidency or the Speakership of the House of Representatives are now subjects of political contention and controversy. “However, now that the party, in its wisdom, has decided to zone the Senate President position to the North-East, we strongly believe that the just and equitable thing for our party to do, is to zone the Speakership of the House of Representatives to the South-East. Instead, what we see rankles our sense of justice and distorts the pattern of fair sharing as intended by the Federal Character clause in our constitution.

“A situation where the same geopolitical zone which produced the Vice President of the country and the National leader of our party, is seen scheming and demanding, with a bloated sense of entitlement, the Speakership of the House of Representatives, smacks of political avarice, brazen injustice and grave disservice to good conscience”, the group said in a statement read by its Convener, Hon. Chris-lance O. Onyemechara, at a news conference Thursday in Abuja. Other signatories to the statement were Prince Magnus Okeke, Chukwukadibia Kalu, Collins Ohagwam, Ozochi Mmadi, Chikwelu Nnabuife and Ozobia Ifeanyi. They argued that many years after the civil war, “the South-East and indeed the former eastern region comprising the lgbo, ltsekiri, lbibio, Tiv, Idoma, Jukun and many others are still faced with rejection, denials, deprivations and exclusion, of political and socio-economic ramifications. Regrettably, this scenario continues to fuel and amplify the voice of few of our agitating brothers who purport to seek the end of the union, in the absence of fairness and justice”. Why S’Easterners continue to embrace PDP “Leaders of our great party, the APC always wonder why the people of the South-East pander to the peoples Democratic Party PDP always, but the answer stares us in the face.

The PDP was not founded by an Igbo man, it is not a South-Eastern party but it offered the lgbo man Senate President, Deputy Senate President, Deputy Speaker, IGP, Defence Chief, ambassadors and very senior ministers. Imagine the multiplier effect across the South-East and it becomes just natural that they will pander to the party that embraced and included them in the scheme of things. it also makes it easier for these top functionaries of the PDP to convince and steer their people to supporting the party in every electioneering period.

“But in our case we are left to swim against the tide. Our assurances to our people that the APC mean Well for our people and are willing to integrate us into the mainstream always fall flat on its face because of the attitude of our party to the region.

“In 2015, the APC denied the South-East principal office positions in the National Assembly on the ground that we did not have a ranking member under the APC. “Four years after, we have produced two ranking members and now our party seems set to shift the goal post again”, they lamented.

I Did Not Award Election Materials Contract To APC Member –...