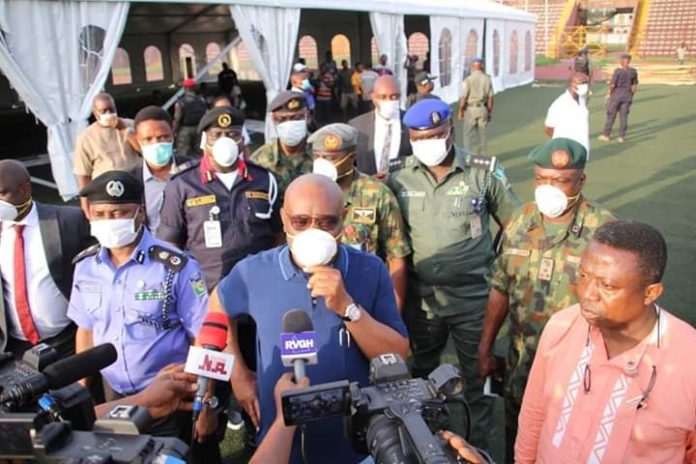 There is nobody that will dispute the fact that the measures to check the spread of coronavirus are tough. But the consequences of inaction are worse. Therefore, every responsible government takes the tough route for the overall benefit of the society.

Just as coronavirus is new, so is the approach to tackle the virus. The methods are different from anything already known and the options are few.

As such, situation analysis is done repeatedly and fresh decisions made as new trends and information emerge. Nothing is cast on stone.

There are different channels of circulating information on actions to be taken by the State Government to protect the citizenry. These channels are known to the people.

Therefore, whenever there is need to inform the people on new updates, the State Government uses the known Channels.

It on that premise that the Rivers State Commissioner for Information and Comminication, Paulinus Nsirim provided the update on the State Broadcast that imposed curfew on parts of Port Harcourt and Obio/Akpor Local Government Areas.

Since the outbreak of the pandemic, Governor Wike has taken several measures to check the spread of the deadly disease. Some of these measures were communicated by the Rivers State Governor through state-wide broadcasts, or through the Honourable Commissioner for Information and Comminication or through other aides.

No measure has been taken for the fun of it. These are measures that are necessary for the protection of the people.

On March 20, 2020, Governor Wike in a state-wide broadcast, announced the closure of schools with effect from March 23, 2020 and also directed religious organisations to restrict their activities.

He informed Rivers people that 158 Surveillance and Ad-hoc personnel have been trained to help fight the disease.

He added: ” One Treatment Centre, Holding Centers in the Two Teaching Hospitals and all General Hospitals in the State are fully functional.

“All Health Workers, both private and public have been trained and briefed on Infection Control Measures and appropriate use of Personal Protective Equipment (PPE),Hand Sanitizers have been procured, Infrared thermometers have been procured and Stockpiling of other commodities and equipment and we have redoubled surveillance at our Airports, Seaports, Waterways and Land routes.”

Four days after the closure of schools, developments in and around the state compelled the State Government to take additional measures. Therefore, there was a compulsory update.

In a broadcast on March 23, 2020, Governor Wike announced the setting up of surveillance posts at entry points into the state. The screening of motorists and seafarers started on March 24, 2020 at land and marine entry points.

The surveillance posts were manned by trained health and security personnel who ensured that motorists and seafarers were tested before they were allowed to enter the State.

Also on Tuesday, March 24, 2020 the State Government closed all public parks, night clubs and cinemas in the State. Public burial and wedding ceremonies were also banned.

On March 25, the State Government based on intelligence, announced the closure all borders linking the state.
Governor Wike said in a state broadcast: “It is with gratitude to God that I announce to you that our State would have been infected with coronavirus yesterday, but for the vigilance of security agents who, acting on a tip- off prevented an infected person from boarding a flight from Abuja to Port Harcourt.

“Based on this alarming Information, the State Security Council met yesterday and reviewed measures already put in place and decided that there was urgent need to adopt stringent measures to protect those living and doing business in the state from the virus.”

A day after on March 26, Governor Wike was compelled to address the state once again following the confirmation of an index case. Further measures were put in place.
.
Governor Wike also announced that all markets in the state would be closed from Saturday, 28th March, 2020.
The Governor also directed that all Civil Servants from Grade Level 1 – 10 are to remain at home from Friday, March 27 until further notice.

Despite the closure of markets, some residents defied the State Government’s directive. Following the violation of the market closure order, the Rivers State Government imposed a curfew on Obiri-Ikwerre Junction( Ozuoba, Rumualogu) to Choba and from Education Bus Stop to Agip Junction .
In a Broadcast on Monday, March 30, 2020, Rivers State Governor, Nyesom Ezenwo Wike said that the State Security Council reached the decision after it monitored compliance with the State Government’s directive.
Ahead of the implementation of the curfew, fresh developments led to the modification of the directive on the curfew. The clarification was given by the State Information Commissioner.
On April 2, Governor Wike in a state broadcast lifted the curfew placed on parts of Port Harcourt. He also reviewed different actions targeted at checking the spread of coronavirus.
Most importantly, he offered further explanation on the reason behind the curfew.

He said: “This became imperative because residents of these areas flagrantly disobeyed the sit-at-home order that was designed to contain the spread of coronavirus.”

For example, the Presidential Broadcast announced a total lockdown of Abuja, Lagos and Ogun States to check the spread of coronavirus. Few days later, national co-ordinator of the presidential task force on COVID-19, Aliyu Sani, gave an update that supermarkets and food markets would be allowed to operate between 10am and 4pm daily.

The Rivers State Government is working hard by the day to ensure that there is no escalation of the crisis in the state. To this end, Governor Wike has engaged religious leaders, council chairmen, Traditional Rulers, youth leaders, transporters, security agencies and women groups to fight the spread of the disease.

In working to protect the population, the State Government takes disciplinary measures like was the case with the curfew. If the implementation is compromised anywhere, the success in other communities will be compromised.

A neighbouring state played to the gallery at the beginning of the struggle. Today, that state has been totally locked down in a desperate move to right the wrong.

When Governor Wike started the comprehensive implementation of processes to fight the spread of coronavirus, many analysts went for his jugular. Today, many states are on total lockdown. Not just the restriction of movement and the closure of markets as practiced in Rivers State.

This brings me to the lies being circulated by the non-existent Rivers APC and their media associates in Rivers State. It is regrettable that editors turn the blind eye when their correspondent propagate lies about the fight against coronavirus in Rivers State and create the impression that it is a political problem. But these newspapers protect the Lagos space and other states within that axis. Coronavirus can only be politicised in Rivers State.
A faceless NGO or Lagos based politician lies that March salaries have not been paid and the reporter writes it when he knows it is a lie. When you ask, he says, I am just doing my job. It appears that once it concerns Rivers State, facts are no longer scared.
For members of the APC and their associates in Rivers State, everything is politics. They even politicise the lives of Rivers people. These are politicians who supported Akin Fakorede of FSARS and the Nigerian Army to unleash mayhem on Rivers people, just to secure political advantage. They are so desperate that they are willing to use coronavirus outbreak to gain political visibility and relevance.

Leaders and prominent members of Rivers APC are basically arm-chair critics who attract nothing to the state. They are ever willing to use their contacts to promote damaging negative propaganda about Rivers State, but cannot attract the minutest projects to the state. In this difficult time, rather than invest in the protection of Rivers people, they expend resources inciting the people to disobey pro-people Government directives to stop the spread of coronavirus.

Happily, Rivers people are confident in the ability of Governor Wike to protect them at this critical time. This is a collective fight. Coronavirus is no respecter of persons. There is no wisdom in the refusal of APC in Rivers State to support the fight . There is no advantage in the failure of APC in Rivers State to reach out to her members with relief materials as they sit-at-home. The lying technique has failed the APC at all levels. Therefore, they should seek better ways to reinvent themselves.

For Governor Wike, he will remain proactive in the fight against coronavirus. He is on ground, exploring all avenues to keep the state safe. He is showing the way at this difficult time. Nobody can stop a “cry cry ” baby from crying. It is in their nature.

COVID-19 And A New World Order By Terna- Kester Kyenge