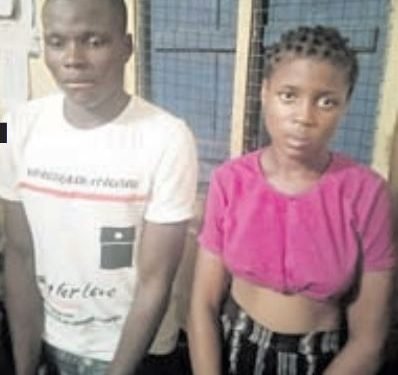 The Police in Ogun State have arrested a 17-year old girl, Seun Adekunle, of 32, Agura road, Abeokuta and her boyfriend, Basit Olasunkanmi, 25, of 4, Ogun Radio, Abeokuta, in Ogun State, for faking the kidnap of the girl.

The two lovers were arrested following a report by the mother of the girl, Bukky Adekunle, who reported at the Enugada Police Division on June 4, that, she sent her daughter to Lafenwa market to buy some items since June 1 and she had not yet returned.

The woman disclosed that she received a call from someone two days later, claiming to have kidnapped the girl while demanding N500,000 as ransom if she wanted to see her daughter alive.

The caller also warned her against reporting the abduction to the police if she still needed her daughter.

The Police Public Relations Officer (PPRO) in Ogun State, Abimbola Oyeyemi, who confirmed this in a release on Friday, said the Divisional Police Officer for Enugada Division, Baba Hamzat, led detectives on technical and intelligence investigation and the outcome led the team to the hideout of the girl and her boyfriend.

They were caught hibernating, yet passing themselves off as victims of abduction. They were promptly arrested.

Opeyemi, a Deputy Superintendent of Police (DSP), stated that the boyfriend who is a butcher lured the girl into the fake kidnap plot on the premise that he wanted to use the expected ransom to sort out an undisclosed financial obligation.

According to Opeyemi, the Commissioner of Police, Kenneth Ebrimson, has directed that the suspects be transferred to the State Criminal Investigation and Intelligence Department(SCIID) for further investigation and prosecution.