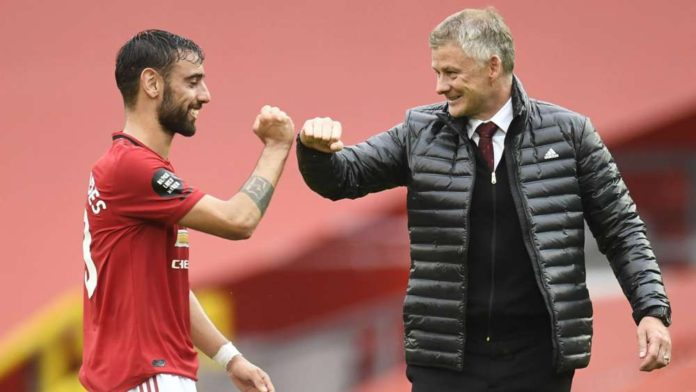 The Portuguese playmaker signed for the club in the January transfer window and has pushed them to a third place finish in the Premier League.

Ole Gunnar Solskjaer has hailed the impact of Bruno Fernandes as Manchester United returned to the Champions League after securing a third-place finish in the Premier League.

A penalty from Bruno Fernandes and an injury time goal from Jesse Lingard secured United’s position in Europe’s top competition next season and completed a remarkable comeback from Solskjaer’s side.

After a disappointing start to the season, they ended the campaign 14 games unbeaten, with a large part of that down to the huge impact Fernandes has had on the side since signing from Sporting CP back in January.

“We have to admit that he’s come in and been a massive influence. A massive impact. He’s been fantastic, scoring goals, creating goals, but also his enthusiasm and mentality around the place has helped,” Solskjaer said.

“Maybe today you can see a tired Bruno and that’s natural because he’s played too much. You can see his passion – he’s moaning a little bit here and there so we will have to take that away from him at times – but he’s stepped up calm as you like and slotted away the penalty.”

After defeat against Burnley in January, Champions League qualification looked like a distant dream and even when games resumed in June, United found themselves eight points off Leicester in third, and the manager hailed his staff as well as the players for getting them over the line.

“It’s been a massive achievement by players and staff the staff are incredible,” Solskjaer said. “We did have a chat with everyone this morning that no matter what happens we’ve come so far as a team, built a culture, very proud of our effort.”

The task now for United is to try and use this season to build for the next campaign, and with many doubting his ability, Solskjaer said he will continue to do things his way as he aims to challenge Pep Guardiola and Jurgen Klopp for the Premier League title.

“It’s a massive challenge, but I’m not the one to answer that [whether he’s the right man for the job]. I believe in what I do. I believe in what I have been doing and we all have different ideas of management and how we go about things and I do it my way that’s the only way I can do it,” Solskjaer explained.

“I have fantastic staff and the players have bought into this the personalities have taken on board what we have been doing. I’m not going to say I’m not the man, of course because I’m in the job, I believe in what I’m doing.”

Remarkable Ronaldo can play on until he’s 40 – Giggs