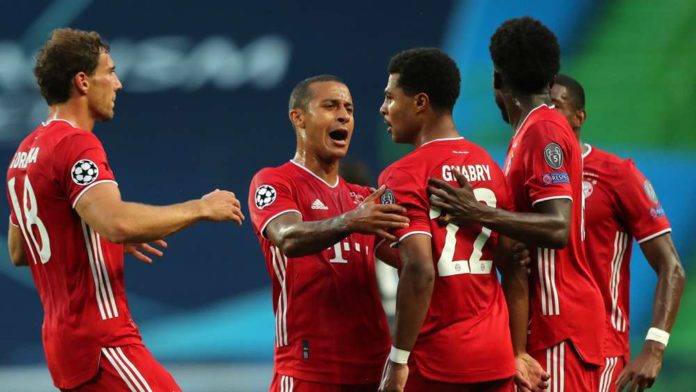 Bayern Munich will face PSG in Sunday’s Champions League final in Lisbon after Serge Gnabry inspired them to a last-four triumph over Lyon.

Serge Gnabry was the hero as Bayern Munich defeated a game Lyon 3-0 to book their place in the Champions League final against Paris Saint-Germain.

Five days on from the 8-2 obliteration of Barcelona, Bayern avoided an upset against a Lyon side who had shocked Manchester City to reach Wednesday’s semi-final at the Estadio Jose Alvalade.

Germany winger Gnabry, a scorer in the Barca rout, was influential, smashing in a stunning 18th-minute opener following a lively Lyon start before adding a much easier second.

The prolific Robert Lewandowski added his 55th goal of an incredible season in the closing stages for the Bundesliga champions.

Lyon found some encouragement in the second half but there is little doubt Bayern deserve their spot in the showpiece on Sunday, when they will aim to complete a second treble in seven years.

Leon Goretzka’s scuffed effort had Anthony Lopes scrambling before Gnabry darted in from the right and fired an unstoppable effort into the top-left corner to open the scoring in sensational fashion.

Gnabry tested Lopes again with a stinging drive and doubled the lead by tapping in after Lewandowski uncharacteristically made a hash of Ivan Perisic’s low centre.

Marcelo headed Lyon’s first effort on target in the 56th minute, while Ekambi wastefully shot their second straight at Neuer one on one after being found in the area by Houssem Aouar.

Philippe Coutinho brilliantly controlled and finished Thomas Muller’s pass, only to be flagged offside after a slight touch from Goretzka.

Neymar is being treated like a pampered rich kid, Brazilians protest