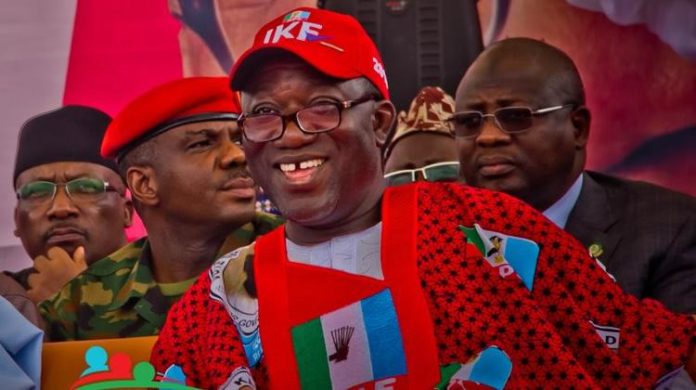 The Director-General, Buhari/Osinbajo campaign council in Ekiti State in the 2019 presidential election, Dr Olusegun Osinkolu, has advised those nursing ambitions ahead of the 2022 governorship poll on the platform of the All Progressives Congress(APC) to be civil in their approaches.

Osinkolu advised the aspirants angling for the governorship ticket to refrain from actions that could divide the party, weaken its support base and create distraction to Governor Kayode Fayemi.

Osinkolu who spoke in a statement in Ado Ekiti, on Wednesday warned those nursing the ambitions to be wary of their actions and think more about the stability of APC.

The APC chieftain advised the party leaders, especially the State Working Committee, to allow free, fair and credible primaries, so that the party can get the best candidate that can retain power for the party after Governor Kayode Fayemi’s exit.

“As much as our members who felt that they were eligible to contest are free to do so, they should also respect the constitution of the party. They must pursue their ambitions with decorum and restraint to prevent internal implosion.

“They should also remember that we still have a sitting governor in Dr. Kayode Fayemi, whose rating in the public in terms of performances would play a pivotal role in helping APC win the election.

“Having internal crisis and distractions in APC would automatically affect our party and we need to guard against this,” Osinkolu advised.

The APC chieftain appealed to politicians across party lines to eschew do-or-die politics to prevent the recurrence of the killings that ‘greeted’ the recent botched House of Assembly bye-election in Ekiti East constituency 1.

He said losing three innocent persons, including a policewoman in an election that was conducted in five wards signalled desperation on the part of political class and forewarned ominous signs of violence ahead of the governorship poll.

Osinkolu also hailed the southwest governors for maintaining joint and coherent positions in the formation and operation of the Amotekun corps, to tackle insecurity in the southwest region.

“More qualified personnel should be injected into the regional security outfit, so that recurrent cases of herders-farmers clashes, kidnapping, banditry and killing that are daily resurging in the zone can be tamed.

“It is not gainsaying the fact that the Amotekun corps has lived up to the expectations of the Yoruba people, but enough still needs to be done in the area of recruitment of qualified personnel to guard our expansive forests being used as hideouts by criminal elements,”,Osinkolu stated.