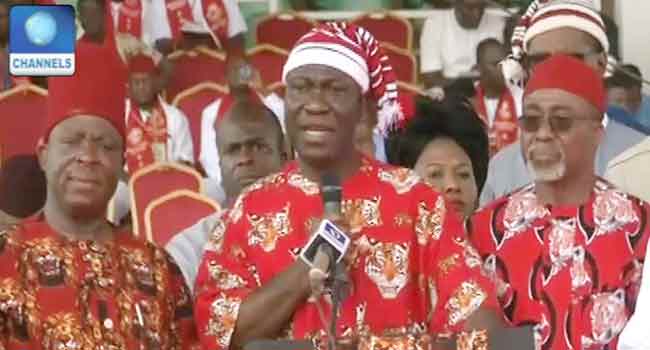 On Friday the former Deputy President of the Senate, Senator Ike Ekweremadu has felicitated with the government and people of Enugu State as the state clocked 30 years.

Ekweremadu, in a statement entitled “Enugu: 30 and Fledging” and made available to newsmen by his Media Adviser, Uche Anichukwu, poured encomiums on successive leaders of the state and the founding fathers, saying although there had been challenges, the state had made progress, while potentials remained enormous.

“This day will always remain special to the Waawa people as we also remain grateful to the military administration of General Ibrahim Babangida (Rtd) for graciously creating Enugu State some 30 years ago.

“It is to their collective credit that Enugu, as former capital of the defunct Eastern region, East Central State, old Anambra State, and old Enugu State, remains a cynosure of unity and egalitarianism, an investment destination, one of the most secure states of the federation, and a rallying point and home for Ndigbo, the people of the former Eastern region, and indeed all Nigerians.

“I doff my cap to the founding fathers of the state such as Chief Christian Chukwuma Onoh, HRH Igwe Edward Nnaji, Chief Enechi Onyia, HRH Igwe Charls Abangwu, Chief Basil Okwu, HRH Igwe John Ugwu Nwodo, and a host of thers for their doggedness, sacrifice, progressivism, and foresightedness,” he stated.

Ekweremadu, while also congratulating the people of the state, reiterated that the future and progress of the state remained a collective task.

“Importantly, I felicitate the good people of Enugu State on this milestone. Ours is a state with enormous potentials, hence I charge all to join hands in our legendary love and comradeship so that together we will continue to build an Enugu of our dreams that our forebears and posterity will be proud of”, he concluded.

Meanwhile, it is recalled that Enugu State was created on August 27, 1991.