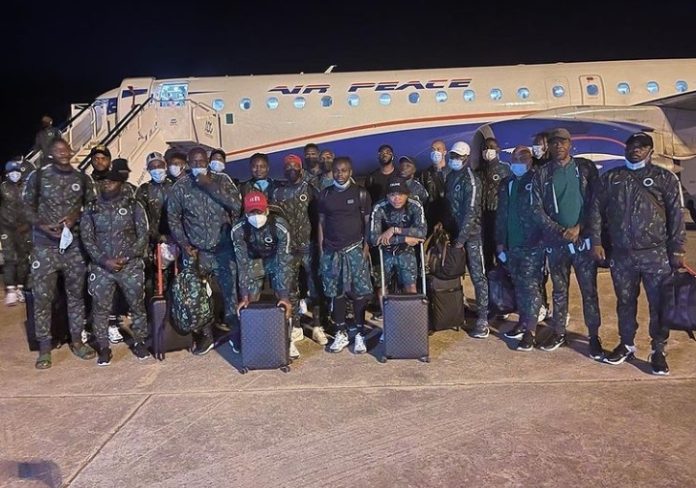 Nigeria have arrived in Garoua for their campaign at the 2021 Africa Cup of Nations which starts on January 11.

They left Abuja with 25 players as they await the arrival of Al Shabab’s Odion Ighalo, Venezia’s Tyronne Ebuehi and Paderborn’s Jamiliu Collins.

Before the trip to the Central African nation, the Super Eagles were hosted by the Ministry of Youth and Sports Development for a send forth dinner at the Transcorp Hilton Hotel in the country’s capital on Tuesday.

Nigeria will begin their campaign for a fourth Afcon title with a Group D clash against Egypt next Tuesday at the Roumde Adjia Stadium.

They also have games against Sudan and Guinea-Bissau fixed for January 15 and January 19 respectively.

In preparation for their 19th appearance in the competition, the Super Eagles will take on Cameroonian top-flight champions Coton Sport in a friendly match at the practice pitch of Roumde Adjia Stadium on Friday, which would be behind closed doors.

Meanwhile, Nigeria captain Ahmed Musa is confident of the quality in the Super Eagles’ attack ahead of the opening game against the Pharaohs who boast of two-time African Footballer of the Year and Premier League’s leading top scorer Mohamed Salah.

“Everyone is talking about Salah but if you look at our team, we have lots of players they will be worried about,” Musa said.

“They talk about Salah but we have players like Samuel Chukwueze and others on the wings who are very dangerous – so that’s football.”

Nigeria settled for bronze in the 2019 Afcon in Egypt after they defeated Tunisia 1-0 in a third-place encounter.

Man Utd focused on winning trophies and not on top four...