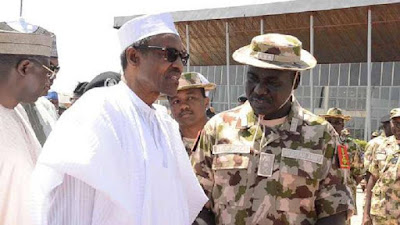 The Rivers State Chapter of the All Progressives Congress (APC) has warmly welcomed President Muahhamadu Buhari to Ogoniland, where he would today flag-off the implementation of the UNEP Report on the cleaning of the land.
Rivers APC Chairman, Dr. Davies Ibiamu Ikanya, in a statement issued early Thursday morning in the state capital Port Harcourt, said: “It is with utmost pride and joy that we heartily welcome His Excellency, President Muahhamadu Buhari, to our dear State to flag-off the clean-up of Ogoniland in keeping with the UNEP Report. The date 2nd June, 2016 will ever remain historical, epochal and remarkable in the life of every Ogoni son and daughter as well as every Rivers son and daughter as it was the day on which President Buhari once more proved himself as a man of principle, credibility and integrity.

“This struggle started by our brother, Kenule Beeson Saro-Wiwa, Africa’s greatest human and environmental rights activist of international repute, and for which he gave his life, is today fulfilled before our eyes through the efforts of another great son of Ogoni, Senator Magnus Abe.”

Going down memory lane, Rivers APC said about the clean-up exercise: “In 2011, sixteen years after Ken Saro Wiwa was murdered, the United Nations Environment Programme (UNEP) released a damning report stating that vast areas of Ogoniland are unsafe for human habitation due to oil pollution. The report found that, in over 40 locations tested, the soil is polluted to a depth of 5 metres. Ogoniland’s water bodies are all polluted. The level of benzene in approximately 90 of the locations is more than 900 times above accepted World Health Organisation standards. This dangerously contaminated water is the source of drinking water for local communities. The UNEP Report recommended that US$1 billion should be allocated to set up an environmental restoration fund and begin the clean-up. In the four years since the report was published, the Nigerian Government simply looked the other way even as Ogoni people buried their dead in worrying numbers every weekend as a result of illness mostly from oil pollution.

“Ironically, a Niger Deltan who should have better understood the lugubrious reality of oil pollution on the environment, health and lives of the people was the President of Nigeria at the time the UNEP Report on Ogoniland was published. Sadly, Dr. Goodluck Jonathan, for reasons best known to him, simply looked the other way in spite of repeated pleas from Ogoni leaders as hydrocarbon pollution continued to wreck lives and livelihood in Ogoniland. Today, June 2, 2016 President Muhammadu Buhari, a Fulani from Daura in Katsina State in Northern Nigeria, will be the one to fulfill the dream of the Ogoni people.”

The statement noted that Dr Jonathan was the only Nigerian President or Head of State that never visited the Ogoniland. It regretted that “not minding the wicked plots by the Dr Jonathan Administration supported by Chief Nyesome Wike to deny the Ogoni people this right to have a decent environment, Chief Wike is still playing politics with this epochal step by President Buhari to restore the Ogoni land and environment.”

Rivers APC hailed Senator Magnus Abe and former Governor Chibuike Amaechi for their roles in making the clean-up of Ogoniland a reality. The party said: “It is on record that Senator Magnus Abe was the Secretary to the Rivers Government under administration of former Governor Chibuike Amaechi whose office rendered required logistics to UNEP officials and was the part of the delegation to visit former President Goodluck Jonathan in August 2011 to plead for the lives of is people to no avail. Senator Abe did not relent but went to every village in Ogoniland to talk about the UNEP Report and with the help of Rt Hon Chibuike Rotimi Amaechi, General Buhari visited the Ogoniland during his campaign, where he promised to implement the UNEP Report.”

The party commended “Senator Abe, our leader, Rotimi Amaechi and, of course, the Presidential Committee led by the Most Rev. Hassan Matthew Kukah, that midwifed the work of UNEP and the present Minister of Environment. Amina J Mohammed for their efforts in making this report implementable, and to APC for creating the platform for this great impact in the lives of our people.”

Finally, we urge Ogoni and Rivers State people to be respectful and peaceful during Mr. President’s historical visit and don’t for any reason allow Wike’s pranks and plots to frustrate the event to succeed.

Junaid Mohammed Should Be Arrested For Treason Against The Igbos Says...