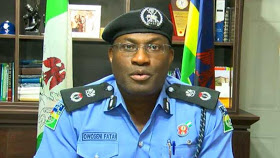 According to Owoseni, the organizers of the protest in Lagos have not notified the police about it yet.Speaking to newsmen in Lagos yesterday, Owoseni said

“Information reaching us revealed that some hoodlums are planning to hijack the peaceful protest. And as such, we won’t allow it to hold in Lagos. We know that Tuface do not have the capacity to contain such a crowd and we will not fold our hands and watch while things go out of hand.”

Another Nigerian killed in South Africa