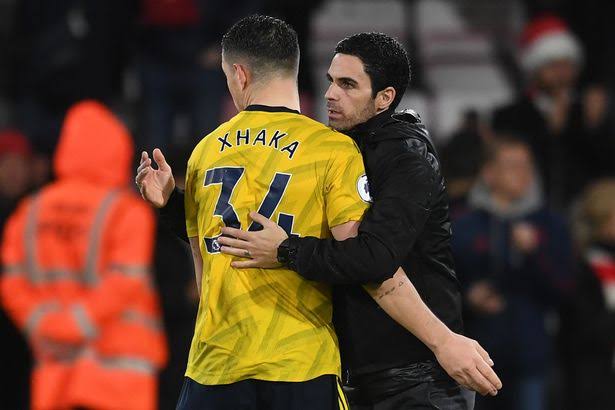 The midfielder looked to be on his way out of north London after his angry reaction to fans when being subbed, but he has remained at the Emirates.

Arsenal manager Mikel Arteta believes the club’s fans should show their support for Granit Xhaka when they are allowed back into matches, revealing he had to talk the midfielder out of leaving north London.

Xhaka reacted angrily to fans booing him when he was substituted during Arsenal’s draw with Crystal Palace in the Premier League earlier this season.

Previous manager Unai Emery stripped Xhaka of the captaincy and dropped him from the starting XI, seemingly paving the way for the Swiss international to leave Arsenal, but since Arteta came in midway through the campaign, he has restored the defensive midfielder to the first team picture.

Ahead of Arsenal’s final Premier League match of the elongated 2019-20 season, at home to Watford, Arteta spoke of Xhaka in glowing terms.

He said: “For a football player when you are on the pitch and you feel you have the fans supporting and you feel their love, it gives you an immense amount of energy and drive.

“Hopefully, he can enjoy that when the fans are back in our stadium. People know better than me what happened and how much it affected all sides when that issue occurred. When I arrived here I had a very high opinion of him and knew him really well.”

Arteta admitted he was unsure of Xhaka when he first took over, having witnessed his fallout with Emery and the fans from afar, but had been quickly convinced of the Arsenal No.34’s usefulness to his team.

“I had to convince him he had a future, he had a place here and he could enjoy his career and his family could be happy here,” he said. “He is a player that when he commits he goes 100 per cent. He has worked really hard and he has won everybody’s trust again.

“I think he’s started to enjoy it again and, normally, when you have those two aspects together – that’s when players perform at the highest level.”

Xhaka has played in 39 games for Arsenal this season in all competitions, playing in all but one of their league fixtures since New Year’s Day.

Arsenal will finish in their lowest league position for 25 years regardless of their result against Watford on Sunday, but they could still qualify for Europe next season if they beat Chelsea in the FA Cup final on August 1.