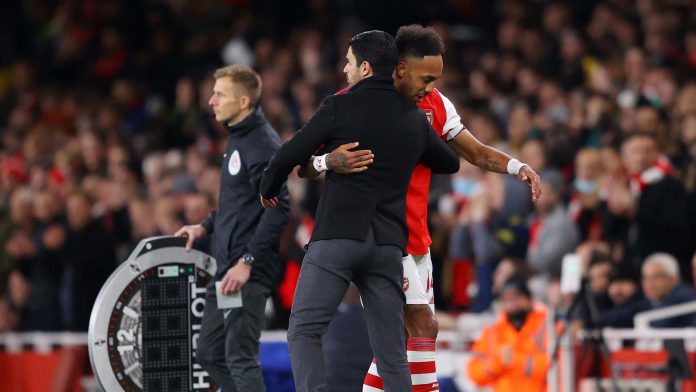 The striker has struggled in the recent past, and that has increased uncertainty around his Gunners’ future.

The 32-year-old striker has gone for six games without finding the back of the net since a 3-0 victory against Aston Villa in October, and his manager has stated that what he needs now is support amid exit rumours.

“Obviously, we have never discussed something like this. When players are under difficulty, what we have to give is support,” Arteta told reporters.

The Spaniard added there is no conflict between him and his striker, as was hinted by Garry Neville: “I have a very good relationship with my players,” the manager added.

“They have to understand that I always do the best for the club and for the team. If I can benefit any of the individuals, I will always do it.

“The decisions are not personal, they are just to get performances and the best out of the team.”

Arteta further touched on the contract situation of Eddie Nketiah, who was introduced ahead of Aubameyang during the loss to Everton.

Arteta further touched on the contract situation of Eddie Nketiah, who was introduced ahead of Aubameyang during the loss to Everton.

“Eddie has six months left on his contract and we are having discussions with him and the agent to try to find the best possible way [forward],” he stated.

“He’s our player, he’s someone that we raised, who has the Arsenal DNA in his blood. He loves the club so much and his reason is that he wants to play more football.

“That’s the genuine reason. It’s nothing to do with anything else, he wants more minutes and he thinks he’s capable of contributing much more. And that’s why I like him.

“At the same time, I have a strong feeling with him that he can really help the team.”

Southampton, who have never won in 22 Premier League away games against Arsenal (D7 L15), will be hosted by the Gunners over the weekend.