Home Uncategorized Wike commences the construction of Sakpwenwa-Bori road to...
Spread the post 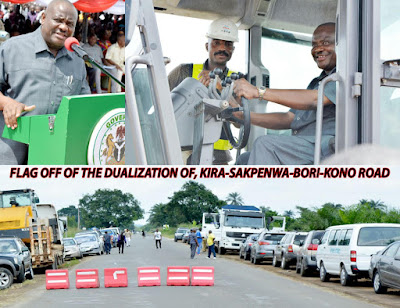 In line with Governor  Nyesom Ezenwo Wike’s  pledge to complete and commission the Sakpwenwa -Bori road to the Ogoni  traditional  heartland,  work has started on the road.

The Sakpwenwa-Bori was flagged off  by Governor Nyesom Ezenwo Wike on Thursday, May 26, 2016.

The preliminary  work of grading the portions of the road which is being dualised  has been intensified with Ogoni indigenes expressing  happiness  that the governor is a man of his work.

Though the Sakpwenwa -Bori road is expected  to  be  completed  in 15 months,  Governor  Wike  said  that  he will sustain funding  to ensure that the contractors  deliver the road in 12 months.

According  to  him,  the  completion  of  the  road will save lives on the ever busy road and also boost the economy  of  the area.

A statement  by  Simeon Nwakaudu,  Special Assistant to the Rivers State Governor on Electronic Media noted Secretary to the  Rivers State Governor, Hon. Kenneth Kobani  who is a prominent  Ogoni indigene , commended Governor Nyesom Ezenwo Wike  for starting work  on  the  road as he promised during his campaign.

He said  that  the governor’s  commitment to the  development  of  Ogoni land  is unprecedented,  pointing  out  that Ogoni  people  appreciate  the  governor’s  gesture.

Rivers State Finance Commissioner,  Dr Fred Kpakol  said that the  Ogoni  people  will remain  eternal  grateful  to  Governor Wike for delivering  on the road when others merely  played politics with it.

Former Member  of  the  House of  Representatives,  Hon Dum Dekor said that the governor’s  gesture towards the Ogoni  people  is better appreciated  when the current financial  meltdown  affecting  states is put into consideration.

Group Calls For Arrest Of Uche Ogah Over Attempted Coup In...