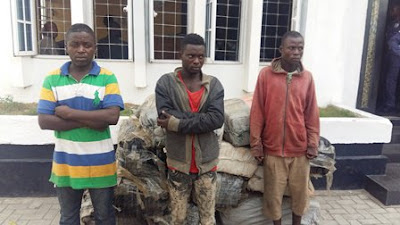 …Five others caught for illegal fishing

Handing over the suspects to officials of the National Drug Law Enforcement Agency (NDLEA) on Tuesday evening, the Commander, NNS BEECROFT, Commodore Maurice Eno said they were caught onboard a fibre boat, MY DESTINY.

“The suspects, substance and the boat are being handed over to NDLEA for further investigation and possible prosecution. Our men onboard NNS KARADUWA also arrested a fishing trawler, FT STEPHANIE that was engaged in illegal fishing around the road stead on February 3.

“It was discovered that the fishing permit of the vessel has expired as such, the vessel was not supposed to fish in Nigerian waters at the time it was caught. So, the five crew members on board could not give satisfactory explanation for their action and they were arrested.

“The suspects-Theophilus Ibikunle, Oshaegbu Shedrack, Felix Ajigbo, Wasiu Lawal and Omotuole Orisameolowa- have been handed over to the Federal Department of Fisheries for further action.

“In line with the mission of the Chief of the Naval Staff (CNS) Vice Admiral Ibok-Ette Ibas, I want to restate the resolve of NNS Beecroft to tackle all forms of criminalities in its area of operation.”

However, the suspected drug traffickers denied knowing the content of the bags were Marijuana.

They claimed they were contracted by one Amos to deliver the luggage around Ojo.

Akiti claimed he was in the boat to collect his money from Anu, who asked him to assist in loading the boat.

He said: “I am a fisherman. I am from Benin Republic but I live at Ikare. It was Jelili that told me to help him load the boat with the bags. After loading, I asked for my money but he said I should follow him so that the owner can pay me. I don’t know anything about it. If I knew it was drugs, I wouldn’t have followed them in the boat.”

But Anu denied Akiti’s claim, insisting that it was Amos who called the latter.

Anu said as a boat operator, he was offered N20,000 on charter basis to deliver the bags to an address in Ojo.